Makhachev asserted his dominance over former lightweight champion Charles Oliveira this past weekend. Despite a lack of experience facing top ranked opponents, Makhachev won convincingly and submitted Charles Oliveira in round 2 of their contest.

In lead up to the event, things got heated between the two fan bases regardless of the fact that the two camps kept things civil. In the end it was Brazil vs Russia, Jiu jitsu vs sambo contest.

Lines were drawn and Gilbert Burns even lost a $50,000 wager to his manager (who he shares with Makhachev) after picking Oliveira to win the contest.

Makhachev saw the clip and ended up posting on his instagram about it: 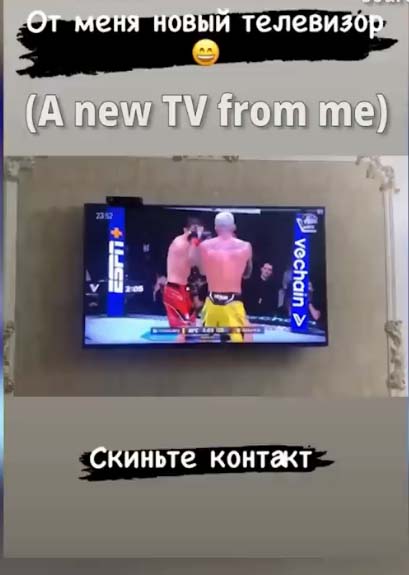 Makhachev offered to buy the fan a new TV writing in Russian “And from me, a new TV” .

Ahead of the bout Makhachev talked about how this will be the first significant paycheck for him.

“I always like to finish my opponents. Right now, Dana White is giving me a new contract he I have in the contract. If I finish like doesn’t matter how they give me a bonus $15,000 the not like they give all fighters like performance of night or other bonus but I have in my account, in my contract, if I finish, they give me bonus.”

Makhachev also revealed UFC 280 will be his first significant payday:

“Uh, honestly, this it’s going to be like my first fight where I can make, like, real money, you know, as are all the money I spent for my family. Like, I build some house for my family, and but now, right now, it’s big money’s coming.”

One of the hosts went on to ask: “So if you had the choice of double the money, but without the title, would you take?”

“It? No. My dream is title. Because all my life I know I training so hard for this moment, I for sure will choose title.”