Zabit Magomedsharipov was one of the most interesting UFC featherweights. The Dagestani native had a very specific style that drew comparisons to Khabib Nurmagomedov. Like Khabib, Magomedsharipov hails from Dagestan but his style was somewhat different.

And unlike Nurmagomedov, Magomedsharipov long had cardio related issues. The issues were rumored to be a result of a diaphragm condition – that could be fixed by a medical procedure.

“The biggest what-if of them all, maybe the greatest what-ifs in UFC history is Zabit… He just disappeared. I’ve asked around… I don’t know if he is (coming back),” said Helwani during his show “The MMA Hour”. “From what I was told, he had like, almost like this moral religious dilemma that he was dealing with.”

“He’s very religious, and I think he reached a point where he just didn’t wanna do it anymore.”

But another rumor surfaced on MMA twitter – that Magomedsharipov is now pursuing a medical degree. This is one of the sources for the news: 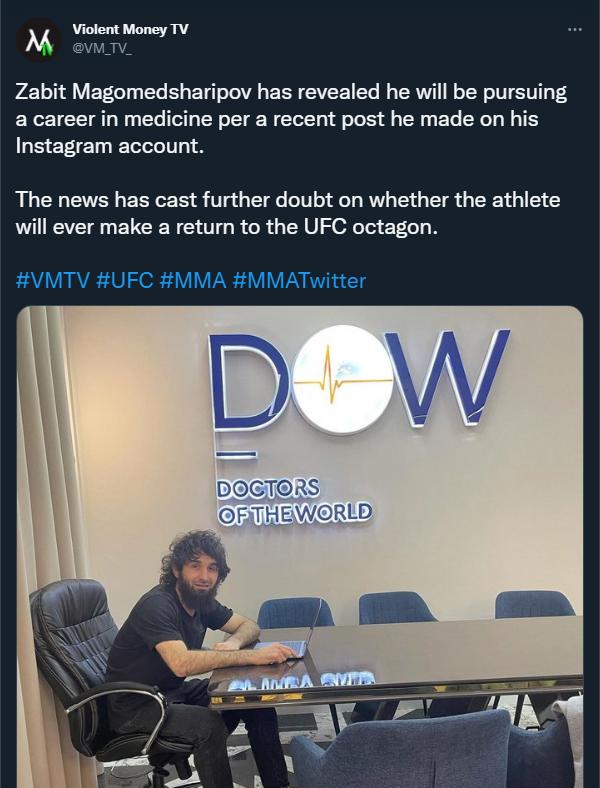 And while the UK based website has content – it has no sources.  The picture in the tweet is the last thing Magomedsharipov posted on his social media some months back.

Here’s how Zabit captioned that picture:

While many rushed to report that Magomedsharipov is becoming a medical professional – the truth is that this is an ad for an app called Doctors of the World. The idea behind the app is simply to link medical institutions and patients in Russia.

As per Ariel Helwani, Magomedsharipov: “He just reached a point where he was like, ‘No, this isn’t for me.”

“He might go down as one of the biggest what-ifs in UFC history because it looked like the ceiling was so high,” concluded Helwani.

Back in September, Zabit’s coach Mark Henry announced on an Instagram post that he was going to come back to the sport. Since then five months have gone by and no official update has been shared.

If Zabit were to comeback, he would come back to a very different featherweight division. When the Russian started his hiatus, Max Holloway was still the featherweight champion.

Nowadays, Zabit would have to go through one of the most dominant champions in the UFC, Alexander Volkanovski, if he were to win Featherweight gold.