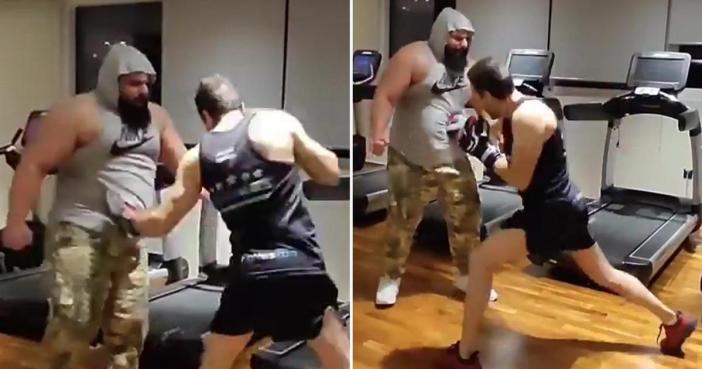 The internet sensation Sajad Gharibi is days away from his long-awaited boxing debut. ‘The Iranian Hulk’ will box‘The Kazakh Titan’ this Sunday in Dubai.

To prove that he is ready for the Titan, Gharibi showed off his core strength by uploading a video of him taking hits in the stomach.

The 30-year-old Gharibi was originally set to box fellow bodybuilder from the UK, Martyn Ford. However, Ford pulled out following concerns tied to Gharibi’s mental state as the Iranian was crying during a televised interview following their face off.

“I cannot call my family; when I returned [to Iran] I didn’t go to my family,” Hulk said in the broadcast while bursting into tears.”I can’t talk to my father and my mother.”

“When I spoke to her, [she] said: ‘The person in this video that I saw was not my son, my son is way stronger than this’. It hurts my heart when I can’t talk to my family. I have lost my pride and I am destroyed. How can I explain? They deceived me and I fell to the ground.”

Several months after the embarrassing turn of events, Gharibi is ready to be back and prove to everyone that he’s ready to make his boxing debut.

For his boxing debut, the 385 lbs bodybuilder will take on ‘The Kazakh Titan’, Djumanov Almat Bakhytovich.

But to ensure his fans that he was ready for Bakhytovich, Gharibi showed training footage of him taking heavy shots to the core from his coach, Hamzeh Moradian in a gym.

“Under the deadly fists of savate national team captain and champion of seven world medals and five Asian medals I survived in kickboxing and savate I had never experienced such powerful blows before,” he wrote in the caption.

While the video itself wasn’t so convincing, that might boost his own confidence during the promotional week.

The pair will headline the Wicked N’Bad event in Dubai on Sunday. On the co-main spot will be YouTube boxer Ryan Taylor takes on social media troll and MMA fighter Anthony Taylor.