Chaos broke out after an Afghan fighter sucker-punched another fighter in the cage at Matrix Fight Night 9 in New Delhi, India. The brawl resulted in a general ban of all Afghans from the promotion.

Bangalore fighter Srikant Sekhar beat Sumeet Khade by a D’Arce choke last Friday at the MFN 9 main card. Following the win over Khade, he called out the Afghan Zahor Shah, who beat him last April at MFN 8.

However, another Afghan fighter apparently didn’t like the way ‘Captain Crazy’ called out his countrymen. Abdul Azim Badakshi then stormed the cage with a number of Afghan fans and sucker-punched Sekhar, leaving him badly injured. During the attack, several MFN officials and members of the local sanctioning body were also present in the cage.

Sekhar then rushed into the hospital following the brawl. Fortunately, he is still able to maintain his consciousness and recalled the incident while bedridden.

“Hey, what’s up guys !! The operation was quite successful and I am here to address the facts to all the MMA fans in the country and people who really supported me over the years. MFN 9 was such a great event and we had some great fights, but really some unfortunate event happened and it was not supposed to go the way it went.” 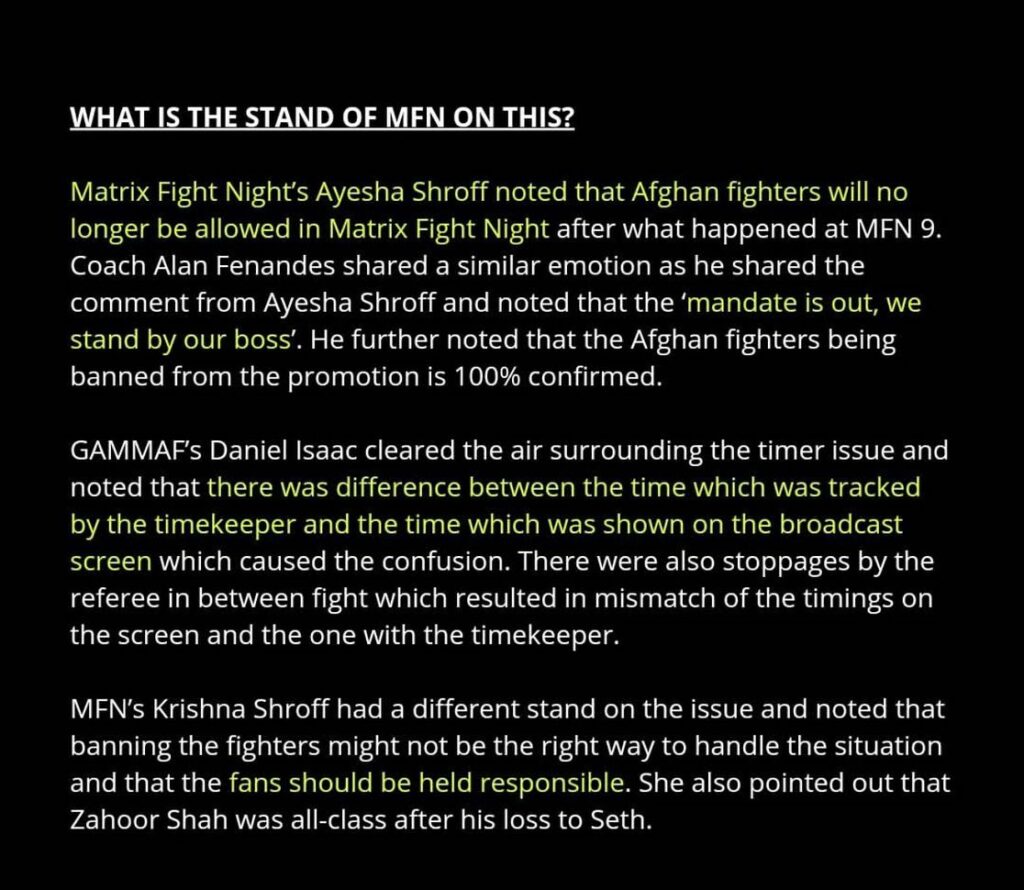 “I was not supposed to be here [Hospital], I was supposed to be out there celebrating after the win, but now I have like a broken jaw, a bleeding ear and five plates to my jaw. I just got over with my operation and I am feeling very emotional about it. Because when I think about it….What is all this for? I don’t understand, I really didn’t deserve this,” he said.

“But this is how things are, when things go wrong. I don’t know what to do from here and these plates. It could have been career ending, it has pulled me back couple of years. I am not happy about it, but at the end of the day, I am a fighter and I will fight through this, I will train, I will make my million bucks, I will go fight the big names and I will be back in no time. I absolutely love the sport and sport has my heart and all you Indian MMA fans, you have my heart,” he added.

MFN’s Ayesha Shroff then bans all Afghan fighters from competing in the promotion, as a result of the brawl.

The ban will be another big blow to the Afghan fighters. In 2021, the newly-reigning Taliban government banned MMA in any form of competition. As a result, Afghan fighters must flee from their country and fight in neighboring countries like India and Pakistan.