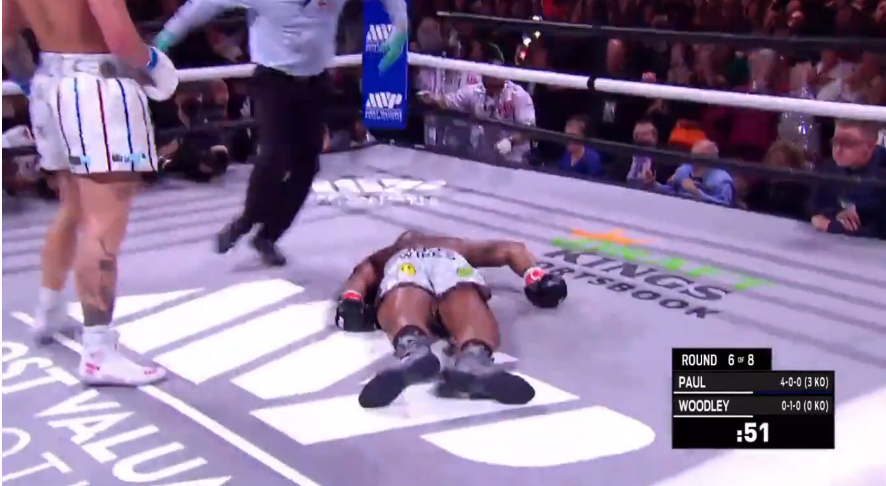 Tyron Woodley made a lot of money last night for what can best be described as a lackluster performance. 39 year old Woodley stepped in late to substitute Tommy Fury and rematch youtuber Jake Paul in boxing.

Round one was fairly uneventful with the two sizing each other up so much that the crowd was booing at one point. Woodley started utilizing his plan from the very first round clinching any chance he got. Round 2 was more of the same. But it seems Paul wizened up to clinching tactics which led to the ref warning them both for striking while in the clinch. Round two also went to Paul likely.

For all the scuffles and fracases and brawls and heated exchanges there have been at Woodley Paul press conferences, still waiting for a fight to break out in this fight.

In round 3 things were heating up. A headbutt appeared to have opened up a cut above Paul’s forehead. The ref believes it was an elbow – either way not a sanctioned punch. Woodley made some strides to catch up in this round. Paul held up his end and didn’t really panic.

In round 4 Paul was back to working the body. Here Tyron Woodley literally took Paul down in absence of actual boxing skill. There was a lot of clinching going around.

Round 5 marked the point at which the referee was very annoyed with the way they were handling the fight. Again there was a lot of clinching – and a headbutt to boot.

Round 6 marked the beginning of the end for Woodley. After just 2 minutes Woodley would throw a heavy overhand right right to the chin of former Welterweight UFC champion rendering him unconscious.

Heck of a way for Jake Paul to finish off the fight and rivalry with Tyron Woodley. #PaulWoodley2

He really put him to sleep ???

Worst fight ever until that ?

Oh how the mighty have fallen