The recent announcement from IBJJF (International Brazilian Jiu-Jitsu Federation) regarding grapplers “closing out” during the finals did not sit well with most of the competitors.

“Closing out” in Jiu-Jitsu is when a grapplers faces a teammate or even a friend during the finals of a competition. To close out means to gives up on the bout as a show of respect, and allow for your friend to get a golden medal unopposed.

IBJJF announced on their Instagram a rule update regarding closing outs. Starting from the 2022 World Championships, grapplers that decide to not grapple in the finals are going to give up their cash prizes and IBJJF rank points they would’ve earned in the event. 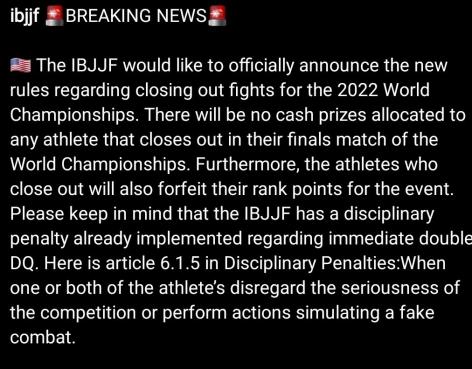 “I mean, “if you don’t do what I want, I’m going to take your toy away”. Athletes need a better life to make the transition from amateur to professional. I know for those who are controlling the sport, managing big teams and etc, it may sound good, but we are making a living by fighting. The athletes deserved to be paid well, the money is in some hands, maybe you don’t have to be so smart to figure out where.”

“Closing out” occurs mainly in IBJJF events due to the fact that ADCC has frowned upon teammates in finales and had long instituted penalties for close outs and fake matches.

IBJJF has long had symbolic financial incentives and has only offered cash prizes in the last several years. The prizes had improved some – but not much considering how much the for-profit federation makes from yearly memberships they mandate and the entrance fees. 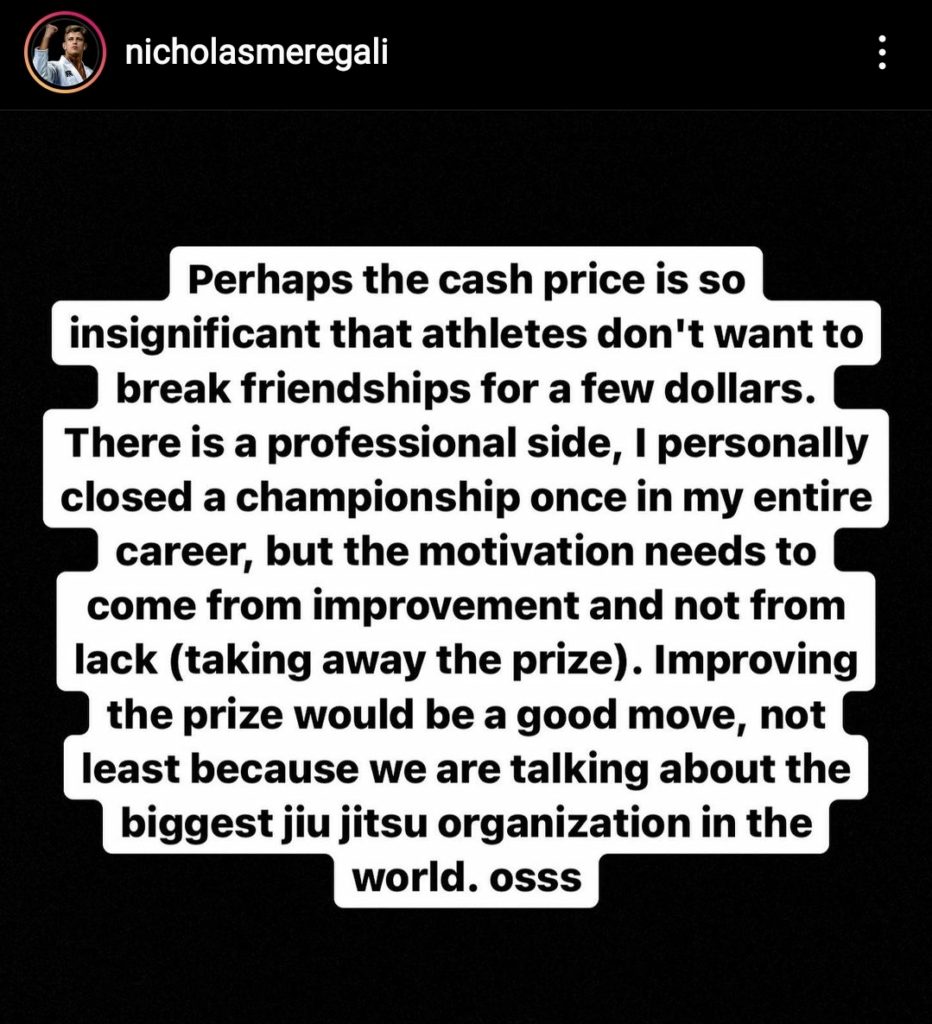 Despite the weak financial incentive, IBJJF titles are still among the biggest titles you can earn in jiu jitsu, especially in the Gi.

The biggest name in the sport right now, Gordon Ryan, has a different opinion on the matter.

According to the 2019 ADCC Absolute champion, BJJ fighters don’t deserve to be paid anything because they don’t draw as much attention as he does.

“I agree IBJJF should pay bigger prizes and even give SOME athletes show money, but most of you honestly don’t deserve a dime, even the ADCC and world champions”

“The fact is no one cares about you.”

“If IBJJF was smart they’d offer me a $75k show purse to enter one of their GP’s this year so I can help save the sinking ship that is their brand.”
“The IBJJF is in the wrong on a lot of things but you athletes live in another world of delusion too.”