Dillon Danis was on quite a roll during last night’s appearance on the MMA Hour. Former BJJ phenom racked up quite a few statements that clash with other people’s accounts of what transpired.

Danis was famously kicked out of Marcelo Garcia’s academy after a prolongued series of provocations he exchanged with Gordon Ryan. While John Danaher had no qualms about Ryan’s provocative statements online, Marcelo Garcia went to great lengths to shut down the beef and go on his marry way.

Danis told a version of the incident that led to it during his appearance on the MMA Hour. He was there to promote his boxing debut against KSI which is booked for January. It’s unclear if it will be treated as a professional bout or an exhibition even to Danis at this time.

“So he posted something about my mom.”

“So me and my, my old friend, we went to the gym and we were looking for him and we, I was like, Go, we’re going to fight. Like it’s going to happen. And he he ran out the gym. He was so scared and so funny and and and I’m serious. ”

Danis went on to say that Rolles Gracie can back up his version of the story.

Ryan was quick to refute the claims and share receipts.

“@arielhelwani imagine lying about something when you know there are receipts? 😂. What actually happened was Dillon came to the gym when he knew I wasn’t there, sent me a pic of the outside of renzos, which was 2 blocks from marcelos and a 5 minute walk, then never showed up again after I gave him my schedule 😂. Talking is the easy part, winning isn’t. Maybe when the guy you’re talking about has more ADCC medals than you have ADCC wins you should just shut up 😂. I do get it though, I’d be miserable if I hadda be you. Mf left me on “read” hahahaha” 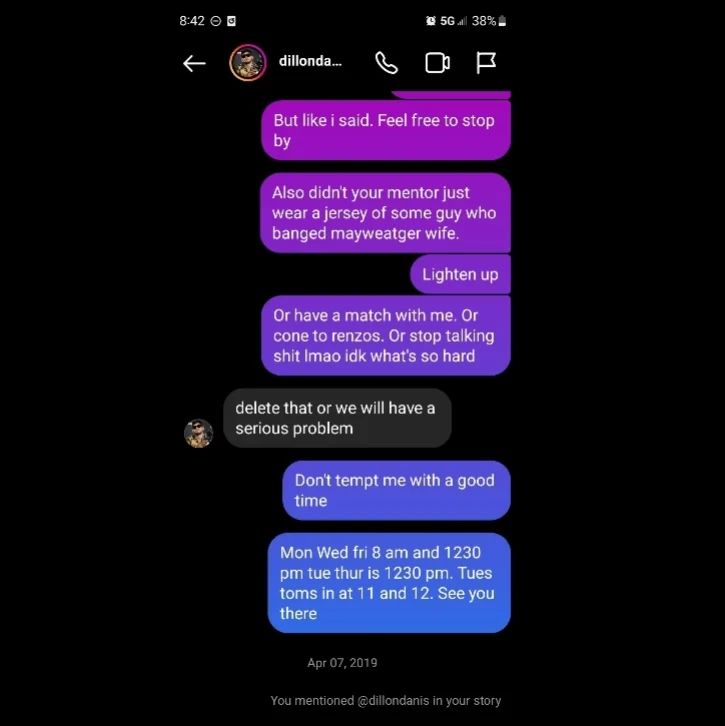 Rolles Gracie went on to support his claims saying:

“Ok… I usually stay out JJ forums discussions and etc, but I don’t want my name associated with this inaccurate story. Did I tell him that I respect the fact that he showed up at Renzo’s? I did. This was after a @kasaigrappling event and he was hanging out with some other athletes and event staff and the conversation led in that direction and I told him that. As far as @gordonlovesjiujitsu running from him thats not true. Dillon showed up at the academy between 3’30 and 5 while there was pretty much no one there including Gordon and maybe not even John. I know Marcelo and John talked afterwards and things settled ” 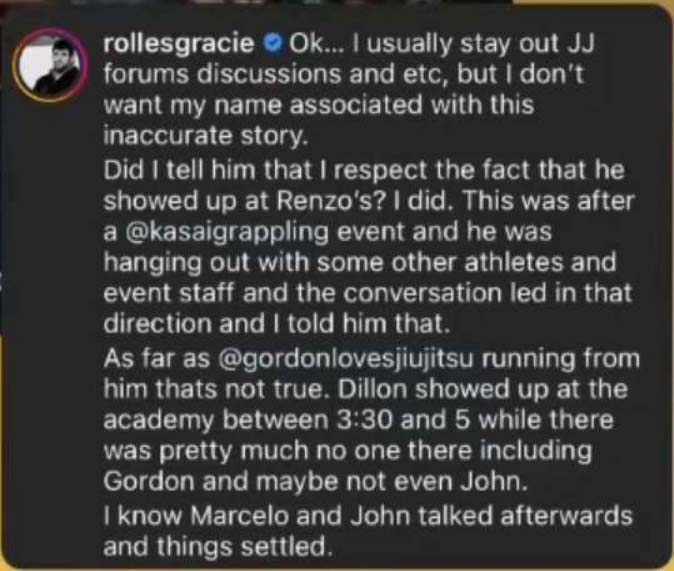