Israel Adesanya is gearing up to face possibly the biggest opponent in his career in Alex Pereira. The two had previously faced each other twice in kickboxing – and both times Pereira was the winner.

However despite the outcome, Adesanya is still a favorite at most sports betting houses. 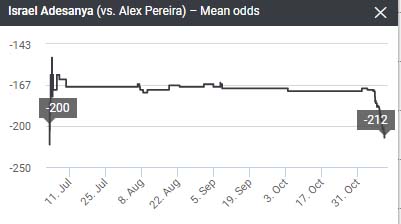 This might be because Pereira has only spent a year in UFC and has limited MMA experience. Many are certainly contemplating if one of them will go for a takedown heavy strategy and exploit the flaws in the other’s grappling.

Both Pereira and Adesanya have weak bjj – but ADesanya has considerably more experience dodging takedowns.

A while back Georges St-Pierre spent time with Adesanya and the two enjoyed a fine meal. After their meeting Adesanya shared what the two had disucssed:

“There’s not many people on Earth, in existence, that’s ever been in this position. I remember wehn Georges was the champion and he was getting the same criticism I was while he was dominating… Georges actually flew from Montreal to come hang out with me, and I felt honored about that. We just chopped it up for a couple of days and I learnt a lot from him.”

“He said heavy is the head that wears the crown and a few other things. We talked about some uncanny – Mickey wouldn’t like what we talked about. We talked about the trappings of fame, of this lifestyle, and just everything. He was so open and I was appreciative of that.”

But former Middleweight Champion has a very peculiar prediction for UFC 281 – he picked Adesanya to win by 3rd round submission and touted it on his instagram. 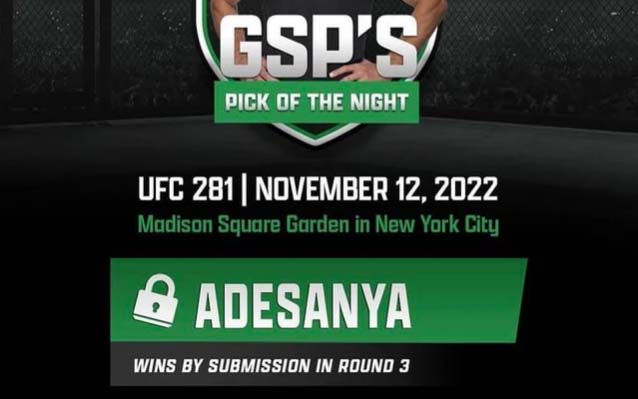 It’s hard to look at this prediction and deem it rational considering that Adesanya had never won by a submission in his 30 bout long career.

So does GSP have inside information or is it a random prop bet?

“I think Alex is gonna get it,” Cejudo said on his YouTube channel. “This is why it’s so important that as a mixed martial artist that you become well-rounded. That you’re not just a striker with good defense. Because what happens when you get that other good striker that has better striking than you then you can’t take him down? Cause that’s kinda where we’re at now with Pereira and Adesanya.

“As good as Israel is, Alexander just still has better striking. He knocked him out the last time they fought, he beat him the first time. If this fight goes on its feet, I just gotta go with Pereira.”