What happens if a couple with martial arts background have an explosive argument at home? This might be one of the extremes.

French Judo coach Alain Schmitt has been accused of domestic violence by his partner and former student Margaux Pinot.

The Tokyo Olympic gold medalist Pinot accused Schmitt of attacking her in a drunken rage in her apartment on Saturday night France24 reports.

“He straddled me, and started punching me, left and right,” said Pinot during a news conference with a bruised face. 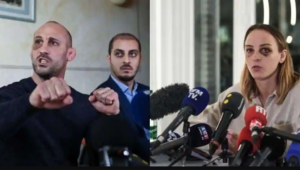 She later added “I didn’t even defend myself to avoid the punches, instead I tried to reason with him. I said ‘Stop Alain, stop’,”.

“I thought to myself, I need to get away from him, or I’ll die here”.

Although the Police had arrested Schmitt, he was eventually released after a court hearing based on the lack of sufficient evidence against him.

“My impression is that I was defending myself,” Schmitt told reporters after being released.

“I have never hit a woman in my entire life. In my intimate life I am a tender person.”

This decision sparked a public outrage which saw a lot of criticism coming from Pinot’s supporters on social media about the case.

Far-left political candidate Jean-Luc Melenchon called the incident “revolting” and said about the court’s decision: “What else do they need? For her to die?”

Socialist candidate Anne Hidalgo, who is the mayor of Paris, said that Pinot “has all my support”, while Sports Minister Roxana Maracineanu said that “Margaux is clearly the victim here”.

In his defense, Schmitt said it was Pinot who attacked him because he was about to leave and coach Israel’s woman judo team to escape his relationship with her.

Schmitt, who also had a large bruise on a side of his face, told the media that they both crashed into walls and floor during the clash and insisted that he “neither punched nor kicked” her.

At a news conference, Pinot rejected Schmitt’s account and accused him of trying to make her look like “a hysterical woman”.

Meanwhile, the Israeli Judo Federation broke off contract with Schmitt following the accusations.