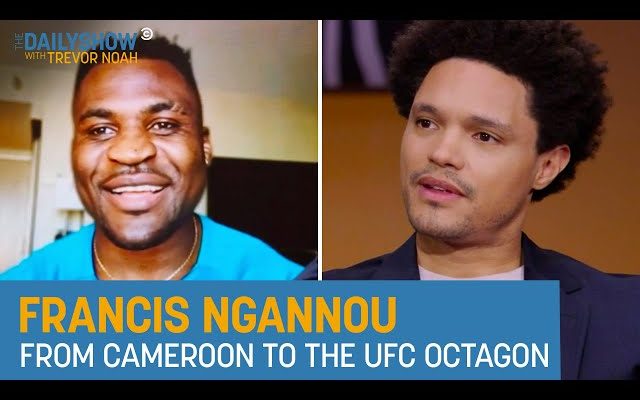 Francis Ngannou seems to be breaking a lot of boundaries. The UFC Heavyweight champ has been able to self promote and secure several lucrative sponsorships while he negotiates with the UFC over a pay bump and a possible clause that would permit him to box.

Ngannou also opted to appear in an unusual venue – an entertainment program hosted by comedian Trevor Noah. Ngannou’s appearance on The Daily Show came a little bit out of left field considering the UFC’s reluctance to promote him as a champion due to his agent strongarming them into letting him become a free agent.

Ngannou who is Cameroonian talked with the South African host about his African roots and upbringing.

He told host Trevor Noah he “expects to have a better contract structure” going forward, “something that puts me in a safe position” financially. Ngannou: “I’m doing a sport that’s very risky, that’s very tough and this sport is generating money. … I just need to have some respect to see that I’m worth it. We need to grow.” Noah: “What I respect about you as well is that you don’t just want that for yourself. You also want it for other fighters and you also want that for other human beings”

The entire interview is attached above.