At the UFC Vegas 67 press conference, Dana White said that Francis Ngannou had been released from his contract and had been stripped of the heavyweight title. At UFC 285 for the vacant title, Jon Jones will now return to the octagon.

Numerous UFC competitors, experts, and supporters have praised Ngannou for his will to hold his ground in the face of numerous offers from the organization, which would have made him the highest-paid heavyweight in UFC history.

But some have criticized the UFC for releasing one of the most intriguing prospects in the world right now.

In an apparent effort to redirect the narrative in the wake of news that contract talks with Ngannou have stalled, the UFC has emphasized that Ngannou is chasing easier opportunities.

“UFC simply lost the bid for Francis [and] instead of admitting that, they go with the narrative the the scariest mother fu**er alive is afraid to fight in the UFC. hahhahahahhahahahhahahahhaa These jokes write themselves #PHSUnreal.” 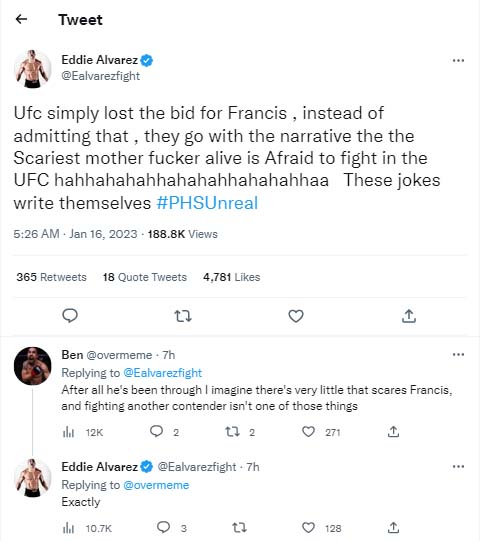 Francis Ngannou has been embroiled in a contract dispute with the UFC for the previous two years. This eventually resulted in the organization announcing his release. The UFC waived the matching rights clause and the exclusive negotiating window, making Ngannou the most sought-after free agent in MMA right now.

Nate Diaz left the promotion back in September 2022. With the exit of these two UFC stars, the promotion has lost two of their biggest prospects in less than six months. While the Cameroonian is aiming for a match against heavyweight boxing champion Tyson Fury, Diaz has long been linked to a possible match with Jake Paul.