The United States Army Reserve officer and congresswoman from Hawaii, Tulsi Gabbard, spoke up regarding Joe Rogan and his recent controversy involving racial slurs. The 40-year-old politician has appeared on the ‘The Joe Rogan Experience’ podcast twice and considers Joe Rogan as a friend.

The UFC color commentator Joe Rogan found himself in big trouble after a compilation video of Joe Rogan saying the n-word emerged online. The audio streaming platform Spotify has made it clear that the company won’t silence Joe Rogan even after all the controversy. But they did remove some of old JRE episodes.

However, Rogan’s career in the UFC appeared threatened as he was absent for commentating UFC 271 event last weekend.

Tulsi Gabbard was there at UFC 271 and offered her take regarding Rogan and his situation. Gabbard said that she agrees with Rogan’s apologies for using the racist epithet. However, she also believes that the outcry about his COVID-19 chats is part of a bigger issue.

“He’s the nicest, most generous, humble guy. And I think he’s done the right thing in addressing these issues that have come up very directly, very honestly and has been very ready to admit how he can be better and apologizing.”

“I think it’s what we would hope to get from from anyone really, and I think how not only a lot of the kind of corporate response has been, but also frankly the White House inserting itself into trying to cancel Joe Rogan points to the bigger issue, which is really the attempts by the power elite trying to silence and cancel people who dare to question the establishment narrative, who dare to maybe hold a different view.” said Gabbard.

Before the racial slur, Joe Rogan also had a huge controversy regarding COVID-19 misinformation. This led some musicians such as Neil Young and Joni Mitchell to remove their music from the platform as a protest. Many people believe that this controversy is what caused someone to make a compilation of rogan saying the n-word.

“Neil Young is free to do whatever he wants. The decisions that anyone makes or, you know, the decision that Spotify has made to keep Joe Rogan, I mean, people are free to make their own decisions.” Gabbard said

Gabbard’s move is especially interesting in light of how another Rogan guest treated the matter.

Joe Rogan has helped boost the careers of many professionals over the years. One of those professionals is former presidential candidate Andrew Yang.

Once Yang saw the backlash that Joe Rogan is facing in light of past use of slurs he thought he should take action.

“I don’t think Joe Rogan is a racist — the man interacts with and works [with] black people literally all of the time,” Yang tweeted Sunday before deleting it, according to The Hill. “Do I know black friends of Joe’s who would swear by him? Yes I do.”

Yang was a notable guest on the podcast back in 2019. He opted to appear during the upstart campaign for president.

Yang took back his support and deleted the initial tweet. He explained subsequently.

“I like to believe the best of people — especially if I’ve met and spent time with that person,” Yang tweeted early Sunday. “Sometimes it makes me miss something. I think we should have the capacity to forgive people — whether a podcaster or a mayor — if they mess up. Maybe it’s because I mess up too.”

“I deleted the tweet because it was wrong-headed,” Yang continued. “I also hurt people, which is never my intent. I’m sorry. I’m learning and appreciate those who reached out to express their feelings.”

“I like to believe the work I’ve done these past years had the goal of uplifting everyone, particularly those on the outside looking in for any reason, be it poverty or marginalization or race,” Yang tweeted. “I’ve always wanted to help those with the least the most.”

“I’m going to keep doing all I can for a more fair, equitable and just country,” Yang wrote. “That means for everyone. Universal Basic Income, Democracy Reform and unity are how we get there.”

Just a day earlier Yang called for a so called statute of limitations on statements. At that point he wasn’t explicitly referring to Rogan – though  it’s more than likely. 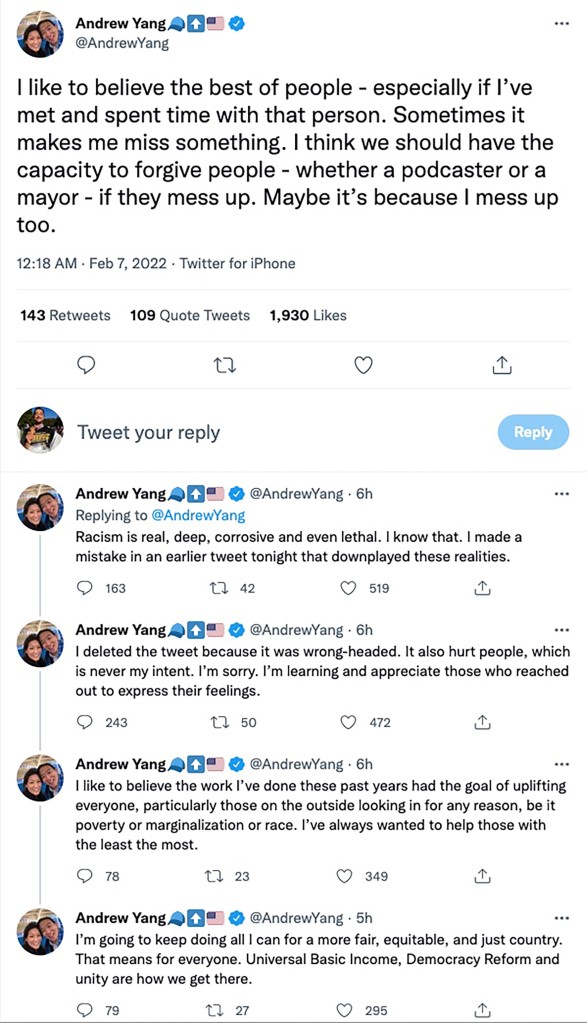 You can listen to the whole Tulsi Gabbard UFC 271 interview below.