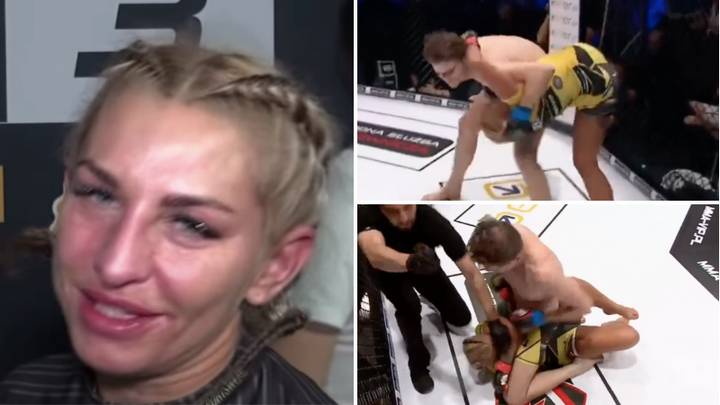 There was a controversial Intergender MMA fight that happened in Częstochowa, Poland on Friday. The bout featured a male named Piotr Lisowski fighting against a female opponent – Ula Siekacz. The fight is one of the two on MMA-VIP3 card that has been branded a “freakshow”.

During the match, both fighters were throwing punches at each other. The two fought fiercely until Lisowski managed to takedown Siekacz and advance his position significantly.

Lisowski took advantage of the position and launched a vicious ground and pound campaign onto Siekacz’s face until the referee waved off the contest and ended the fight. Lisowski, who was wearing eye makeup during the fight, was announced as the victor.

A lot of MMA fans find this fight to be inappropriate and shouldn’t have happened. They blamed the promoter for permitting a man vs woman fight. But Siekacz, the female fighter, thinks otherwise as she was the one who agreed to attend the fight.

She wrote on her Instagram after recovery and with full confidence. She also promised to be better.

“Hi guys, I’m back alive and we go on. I’m not going to get slapped by a guy anymore. I consciously took up this fight – that is, I knew what I was doing. I am waiting for some interesting suggestions and I will continue to develop. What doesn’t kill us makes us stronger.”, said Siekacz.

They said: “It is unacceptable that women and men should compete against each other in combat sports, essentially for reasons of safety but also fair play, and we in no way endorse this.”