At UFC 280 on October 22, Charles Oliveira and Islam Makhachev will square off for the vacant lightweight championship. MMA supporters are rallying to keep Daniel Cormier off the commentary team for the much-awaited title fight because of his commentary bias.

Along with Jon Anik and Joe Rogan, Cormier is one of the three main commentators for the numbered UFC pay-per-view events.

Fans first accused Cormier of providing Israel Adesanya preferential treatment during his light heavyweight matchup against Jan Blachowicz at UFC 259. He was accused of being prejudiced.

Given Cormier’s great regard for the Dagestani star and their strong friendship from his time together at the AKA, many fans anticipate Makhachev to be treated similarly. This is only one of the arguments by several supporters who want the former two-division champion removed from the commentary booth in Abu Dhabi. 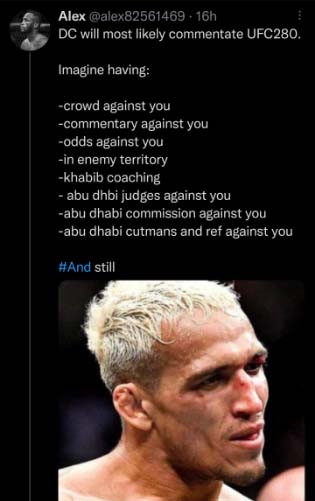 During his undefeated streak, Islam Makhachev has shown nothing less than remarkable physical attributes. But the fact remains that he has no wins over top contenders in the most stacked division in the UFC.

It’s common knowledge that Khabib Nurmagomedov  wants Islam Makhachev to succeed him as the lightweight champion of the UFC. But Makhachev falls short in the talent department – and if you need confirmation just look at his bout against BJJ stand out Davi Ramos. Makhachev made Adesanya’s style amusing by comparison.

Makhachev tweeted his confidence in defeating the Brazilian after the bout was announced:

And while fans have a point about Cormier’s commentary – it’s doubtful UFC will opt out of including him in the broadcast. For one, Joe Rogan refuses to travel outside the US and with the card scheduled for Abu Dhabi they’ll be down one either way. Michael Bisping is most likely to step in as a replacement for Rogan. We’re most likely looking at a team consisting on Anik, Cormier and Bisping.

Here are the opening odds for Charles Oliveira vs. Islam Makhachev: