It was just what the South Korean needed to get back on track after defeat to Gregory Rodrigues at UFC Fight Night: Costa vs. Vettori.

Eryk Anders suffered his second consecutive defeat. He had previously lost to André Muniz at UFC 269.

The main card opener for UFC Vegas 55 was a classic instance of wrestler vs. striker, as seen by the post-fight statistics.

During the first round, both  threw the same number of blows. However, there is a big disparity in results.

Anders landed 42% of his blows in the second round, or 16 out of 38. Park increased his pressure by hitting 59% of his blows. In the two instances, Anders was able to wrestle Park to the ground. 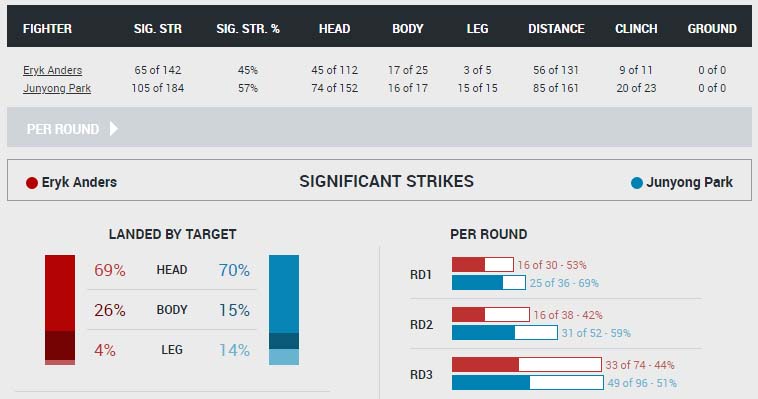 Anders tried 12 takedowns in the last round. However, none of them were effective, highlighting the disparity between the two competitors.

Junyong Park stayed true to his striking, and it paid off. His 96 blows were counted as significant ones. 49 of them hit the intended target, which was mostly his opponent’s head.

Park defended off Anders’ over 20 takedown attempts. He landed more blows in the stand-up portion of the bout.

The two judges gave Junyong Park the victory because of his striking edge. They seemed to favor more precise strikes over takedown attempts.

The win was granted to the South Korean fighter by both Anthony Maness and Sal D’amato. Their scores, however, were different.

Park won two first rounds from Maness and the last two from D’Amato. Mike Ball scored as well but in Anders’ favor.

For each round, the three judges’ scorecards effectively read different scores.