During his latest appearance on the Michael Bisping’s Believe You Me podcast, he told one story that exploded on the internet since.

He explained that at his title fight against Jon Jones at UFC 235, Donald Cerrone and social media star Dan Blizerian forced Smith’s wife and mother out of their seats while under the influence.

Not stopping there, he also claimed that Blizerian watched adult videos on his phone while sitting in front of Smith’s mother.

“So I saw your nonsensical story where you’re using my name for clickbait,” Bilzerian reportedly said.

“You should at least try to have some semblance of truth in there,” he continued. “First off, Cowboy invited me to that fight and he had the tickets. I didn’t ask anyone to move and certainly not your mother, I also didn’t watch p*rn, if she was looking at my phone I’m sure what she saw was a random Snapchat from a girl that turned out to be naked when I opened it.”

“I don’t drink so I certainly wasn’t hammered,” he added. “Your depiction of this story is complete bullsh*t.” 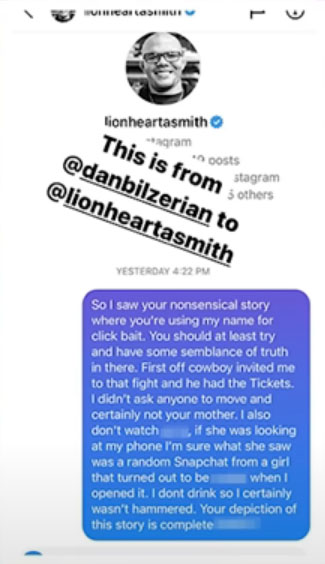 ‘Cowboy’ also shared his side of the story while claiming that Smith’s accusation “don’t make any sense.”

“Okay, Anthony Smith. You are way the f*ck off bro,” said Cerrone on his Instagram story. “I can’t believe you put a story out there three years after your fight saying me and Dan threw your mom and your grandma out of their seats.”

“First of all, I had tickets in Dana’s section, two seats. Nobody was in those”

“And then you are saying that your parents saw him looking at p*rn so he threw them out of their seat but then they were still sitting somewhere else. I don’t understand your story. And how were they even have got into that section? Because that’s not just a section that people can get tickets to.”

“So you got a lot of holes in your story. I don’t understand but; I have also seen you since the fight and you never once said anything to me. So, you just wanna go on.”

Smith has yet to answer their rebuttal.