Dillon Danis caused quite a stir last week when he joined Chael Sonnen and made complaints about his contract to box KSI.

Danis made it seem as though KSI and his management were trying to add last minute clauses to the contract as to dehydrate him.

He went so far as to call the changes ‘fishy’.

Days after this appearance, KSI’s manager went on to take out the provision from the contract fearing a pull out.

“Ok, how’s this…even though you signed and agreed to the contract 2 months ago…. We will take out the rehydration clause entirely so you have no excuses left to back out now. Nowhere to run. Dillon Danis. Let’s run it!” 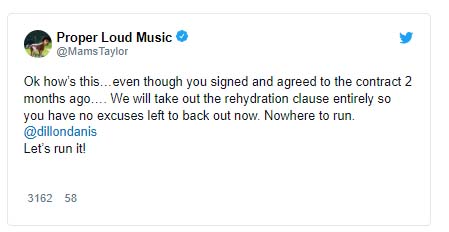 But the stakes might’ve been too high for Danis, after KSI went on the record with the opinion that Danis should retire from all combat sports if he were to lose to a ‘youtuber’.

A short while after KSI posted the confirmation that the boxing match was no longer happening.

The show must go on. I’m still fighting January 14th

“As you guys are aware, Mr Danis has made quite a few excuses, he signed a binding shortform contract and no material changes were ever made.”

“His team, who I feel sorry for because they’re very co-operative and respectful – they came and said to me ‘Dillon is pulling out of the fight’. The real reason is, from what they said to me, that he’s underprepared. He has no coach, he might be struggling with weight even though there’s no rehydration, he has not been able to find a team that’s going to support him to bring him into the fight.”

“Obviously he’s got some other issues, it’s very sad and unfortunate because he didn’t reciprocate the respect that we’ve given him and no word from him. He’s clearly embarrassed that he’s in this position and who knows what he’s going to come out with and say, but I’m disappointed.”

“I never thought that someone who cares about his reputation or what people think of him as much as he does, I didn’t think that this would be something despite many people saying the opposite. They said he wasn’t going to show up to the fight and they were right.”

Dillon confirmed he had no coach to speak of during his appearance on the MMA Hour. As per Danis, he was going back and forth between different gyms and training.

Prior to the event he announced he would be looking to compete 3 or 4 times in 2023. Danis hasn’t competed at all in combat sports since 2019 when he had to undergo two consecutive knee reconstructions.