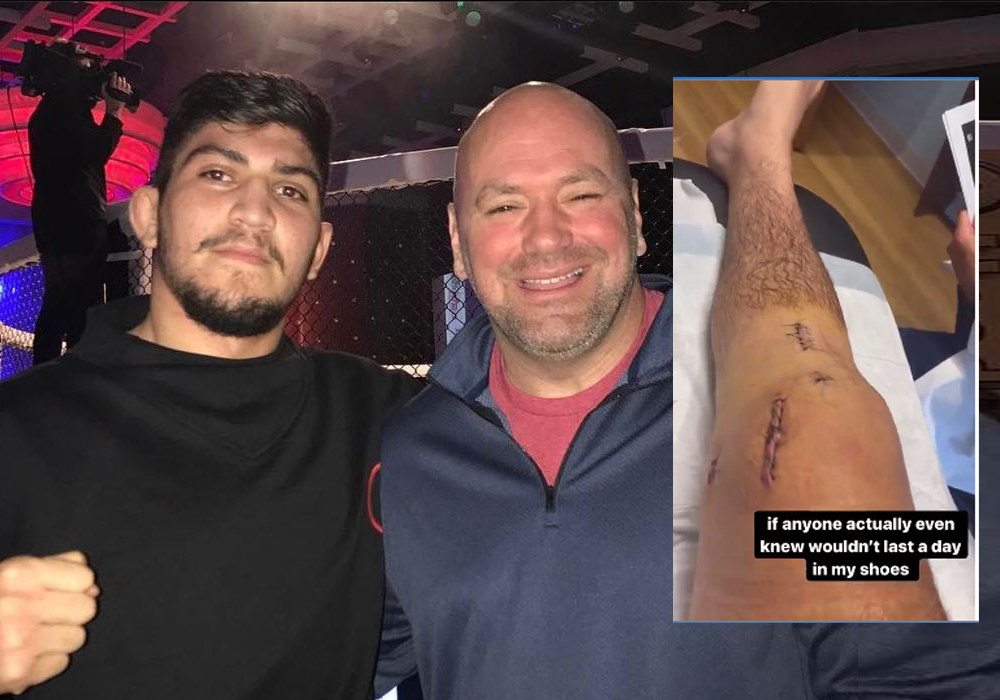 While Dillon Danis talks a big game his return from a catastrophic knee injury isn’t so certain. The bjj ace shared with the MMA Hour last night that he’s had multiple knee surgeries and isn’t currently allowed to rotate his foot. According to Danis himself, he has to let the new ligament grafts solidify before doing any kind of training.

Which brings us to the knee damage and extreme situation Danis is in currently. Following his last Bellator fight Danis detailed after an LCL tear:

“I don’t have an MCL or meniscus. ” Danis continued “So I’m just gonna have nothing in my knee ”

And true to his story he underwent a 7 hour reconstructive knee surgery after the fight.

He recently shared the state of his knee:

As you can see his knee is far from the usable in terms of professional sports – but one can only hope Danis can stay out of legal trouble long enough to give some of the pro grapplers a hard time again if not the Bellator fighters.

In terms of a combat sports return Danis is optimistic but it sounds like 2nd quarter of 2022 would be a realistic target. For his return Danis is already handpicking opponents having told MMA Hour’s Ariel Helwani he would love to fight or grapple Jake Shields and specifically MMA fight UFC veteran and legend Diego Sanchez or Bellator sensation Michael Venum Page.

“When I come back, my comeback fight is either gonna be Jake Shields or Diego Sanchez. That’s who I wanna fight when I come back.”

“I can send you the messages that Diego says, that motherf****r’s crazy. So if he wants to get it, I told him too, I was like, ‘Bro I’m gonna hurt you so bad.’ He’s like crazy, like bro you don’t know what I’m going to do to you,” Danis explained. “Jake Shields can get it too. John Wayne Parr. I don’t care who it is. I’m gonna come back and gonna fight one of them. Even Michael ‘Venom’ Page, I’ll fight him. He’s so bad, he’s terrible.”

You can watch the entire Danis interview on the MMA Hour below: