Dillon Danis has been all up in the Paul brothers business. On the wings of rumors of a boxing match against the bigger Paul brother – Logan, Danis is not done with Jake.

Jake Paul has announced that his upcoming August 6 pay-per-view card will be canceled altogether. The main issue was his opponent, Hasim Rahman Jr has been reportedly having issues with his weight.

Paul’s promotion, MVP, has released a statement regarding the cancelation. In the statement, it was said that Rahman planned on weighing this Friday at 215 pounds, 15 pounds heavier than the original contract. While Paul’s team is willing to compromise a 5 pounds addition, Rahman’s camp said that they would withdraw if the bout was not at 215 pounds.

Bellator signed mixed martial artist Dillon Danis refuted this claim.  As a reminder, Danis is most famous as the jiu jitsu coach of Conor McGregor. He has since instigated a number of beefs featuring prominent MMA personalities.

“I heard from inside the camp of Jake Paul that his manager and team tried to pay Hasim Rahman to take a dive but they rejected it.” Danis writes on twitter. 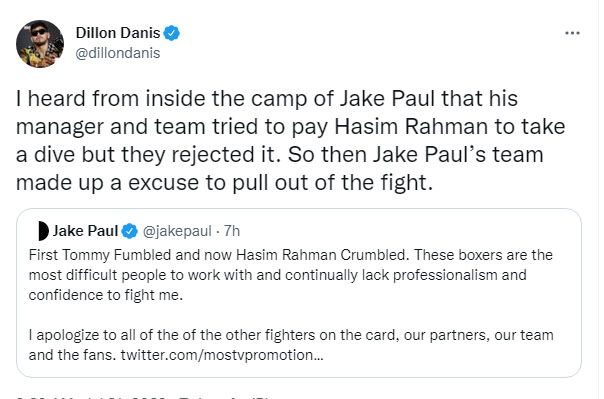 Danis previously talked a lot about a rumored clause in Tyron Woodley’s contract forbidding him to knock out Paul in their rematch.

Dillon Danis returned to the public eye after his arrest and made some very interesting claims regarding the boxing match.

“Tyron Woodley, from what I heard, had it in the contract that he was not allowed to knock out Jake Paul,” Danis said.

“I swear on anything, that’s why when Jake Paul was against the ropes, Tyron Woodley didn’t hit him.”

Woodley also stated that he doesn’t get why people believe what Danis has to say, or even listen to him at all.

“Why does he become a valid source to anybody? If people wanna talk about stuff, I’m gonna let them talk about it. That’s how the sport works; whether it’s good or bad.”

“Like, I’m not on Jake’s PR team. It ain’t my job to give him credibility and like, make people believe that he’s the real deal; that’s his people.”

“And people who think there was some knockout clause, based upon Danis who – how would he have access to my contract?”