Demetrious Johnson is one of the most underrated, yet dominant UFC champions ever. He ruled the flyweight division for a period of almost 6 years, building up a 13-fight winning streak. However, Johnson recently said that he was seriously underpaid based on his caliber.

The MMA legend recently spoke to MMA Mania, where he explained his pay scale. He talked about the first phase of his UFC career when he was a bantamweight. He revealed that his championship fight against Dominick Cruz guaranteed a measly $14k.

“When I fought Dominick Cruz [for the UFC bantamweight title], I was fighting for 14k [to show] and 14k [to win],”

One fight later, he’d get a new contract when he rematched against Ian McCall. This one paid him $20k to show and another $20k to win.

“Lost to Dominick Cruz, I made 14k. Then I was about to fight Eddie Wineland, but that didn’t go through so I fought Ian McCall in Australia. I was still on that same contract.”

After winning the UFC flyweight championship, he said that he started getting some bumps in his pay. He talked about his first three title defenses and how he’d get $3-4k more every time.

When he got a new contract, the guaranteed payments to show became significantly higher.

However, quite unfairly, “Mighty Mouse” didn’t get PPV points as the other champions did.

He mentioned missing out on some serious bread when he was co-main eventing with high-drawing champions.

“Because if you get on a card with a Conor McGregor and he does 2.1 million buys, then you just do the f—ing math, you’re going to make a s—load of money.”

DJ said that he had had enough when the UFC offered him the TJ Dillashaw. He told them that it was a money fight and that he wouldn’t fight the rising star for less than $1 mill.

“I never got the opportunity to do that, so when they tried to stiff arm me for the fight against T.J. Dillashaw I was like ‘Pay me a f—ing million dollars and I’ll do it. This is a super fight, let’s make some super money.’ They never wanted to do that.”

Fans and media are furious after these details were disclosed. Many now understand why Johnson was voluntarily traded to ONE FC.

However, there is a journalist who’s pointed out that he may be wrong about some of the numbers here. John S. Nash tweeted that Johnson made $29k/$29k for the Moraga fight, not $26k/$26k and $125k/$50k for his second fight against Benavidez. 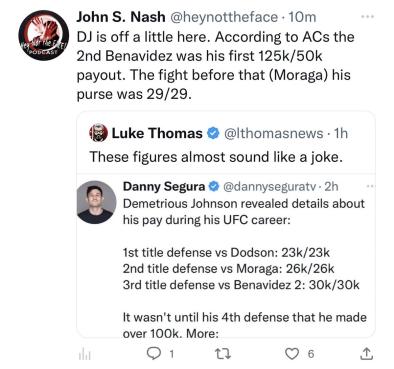