One UFC fan took his admiration of Khamzat Chimaev and Darren Till to the next level. He opted to get a tattoo featuring their faces on his calves.

With their bromance, Darren Till and Khamzat Chimaev have been igniting the MMA world. The amiable duo began training at the All Star gym in Sweden, followed by a trip to Vegas.

Since they started training together earlier this year, Chimaev and Till have become close friends. Both fighters are excited to return to the Octagon later this year, with Chimaev perhaps getting the chance to contend the welterweight championship against Kamaru Usman.

In a recent tweet, Till praised the fan who got the leg tattoos of him and Chimaev.

“What a f**king honour this was to see this today,” Till said. 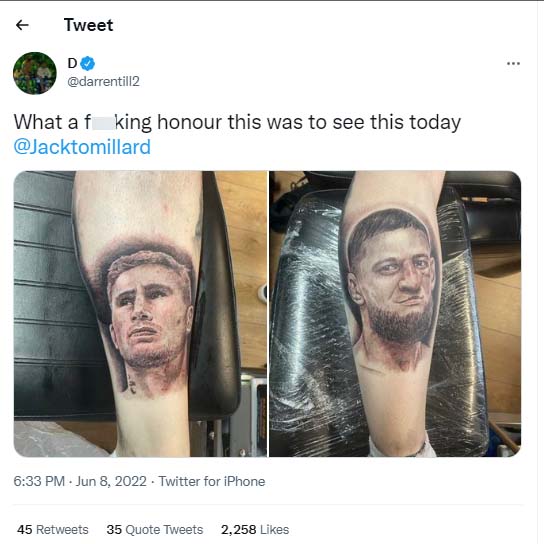 The Chimaev tattoo in particular is dated – a cut can be seen on his face that opened as a result of his clash with Gilbert Burns earlier this year.

Till is set to fight Jack Hermansson at UFC London on July 23 later this year. After losing back-to-back middleweight fights to Derek Brunson and Robert Whittaker, he’s trying to get back on the winning track.

Chimaev is coming off a ‘Fight of the Year’ contender victory over Gilbert Burns at UFC 273. He’s unbeaten in MMA and might face either Covington or Usman in near future.

This isn’t the first time UFC fans have gone to extremes to show their support for their favorite fighters, but the Till/Chimaev tattoo is possibly the most memorable.

The fans are one of the main reasons why MMA is as popular and thrilling as it is today. The events are what they are because of the fans. They bring an unfathomable amount of passion and energy to the table.