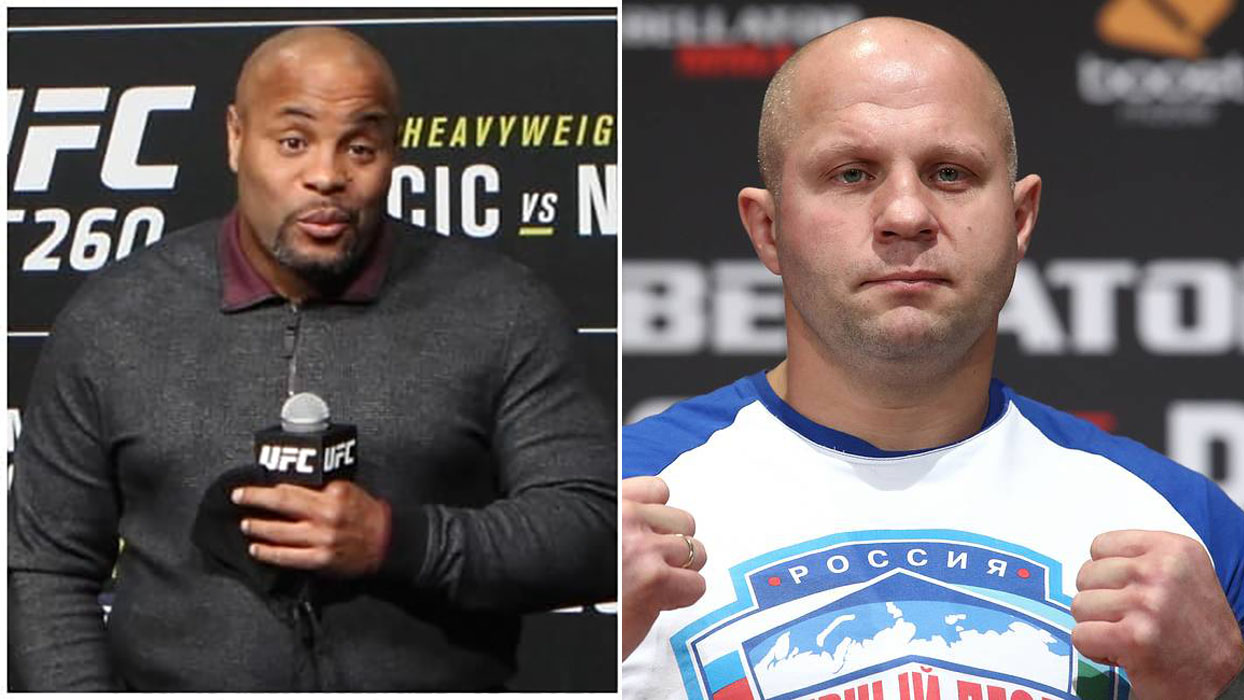 Fedor Emelianenko fights Tim Johnson in the main event of Bellator 269 this weekend. This will be the first time he’s fighting in almost two years.

Emelianenko is widely regarded as the best mixed martial artist who has never fought in the UFC.
However, because he hasn’t fought in UFC, opinions differ on Emelianenko’s place in the “Greatest Heavyweight of All Time” debate. It is also doubtful as to how well The Last Emperor would have fared in the world’s premier MMA organization. And for one former UFC champ, the answer is “not great.”

Former UFC champion Daniel Cormier answered an interesting question during his discussion with fans for his new show “Debate DC”. Cormier was asked how Fedor Emelianenko would have performed in the UFC if the deal had been struck in 2009.

Cormier was not optimistic about Emelianenko’s capabilities:

“We’re talking a window of 2009-11,” Cormier told the fans, as transcribed by MMAFighting. “(That’s) where the UFC dealt with Fedor or at least tried to make something happen. The UFC was interested for a long time, until he went to Bellator and then obviously he’s off limits. But all the time, Fedor kind of flew around, fighting in organizations, things can still be done.”

The UFC was fascinated with Emelianenko for a long time. And several times the deal was close to signing.

Cormier further explained that Fedor could have beaten guys like Brock Lesnar at that time. But it would be difficult for him to deal with guys like Junior Dos Santos and Cain Velasquez.

“Versus Brock Lesnar, I’ll give you that. I think he beats Brock Lesnar. But outside of that, I don’t think Fedor competes very well in the UFC. I think that, honestly, Fedor not going to the UFC allowed for the intrigue to stay, but the reality of the situation is he would not have done well against those guys like JDS (Junior dos Santos), he wasn’t beating Cain Velasquez, he would have struggled with guys like Cheick Kongo. He was not beating those guys that were at the top of the UFC at that time. I’m certain of it”.

Former MMA star said that he is not talking trash and in fact liked Emelianenko’s skillset a lot. The only thing that made him so curious is the speed of Fedor at that time of his career. He had not acquired the required speed to match guys like Cain Velasquez.

“The guys weren’t so singular anymore, in their skills…. At the time that Fedor was going to go to the UFC, the speed had started to slow down and that’s where Fedor would have struggled. The hand speed that Fedor displayed early in his career was second to none and that’s why he overwhelmed people the way that he did. “

Emelianenko would go on to have two defeats in Strikeforce following the failed negotiations with the UFC in 2010. Following a brief stint at M-1, Emelianenko retired in 2012 and stayed retired until 2015. Some time in 2017 he signed with Bellator where he plans to finish his professional career.