Following his physical altercation with his wife on New Year’s Eve, UFC president Dana White’s slap-league debut will not air on TBS as planned.

While they were celebrating New Year’s Eve at El Squid Roe in Cabo San Lucas, White was seen on camera slapping his wife Anne during an argument.

Power Slap league’s tv debut seems to have been delayed as a result of the event after White received criticism and delivered an apology.

Slap league has been replaced with re-runs of Young Sheldon on the schedule and AE Wrestling didn’t feature ads for Slap league for the first time last night.

UFC and Slap League socials would have us believing that the show will air on TV in a week – but there are several sources casting doubt on those reports.

The debut episode of Power Slap was supposed to air after AEW on January 11 at 10 p.m. EST. However, Front Office Sports reports that TBS no longer has it on the schedule for that evening.

Instead, the channel has decided to screen repeats of “Young Sheldon” on January 11 and the following Wednesday. This was the day when White’s league’s second episode was supposed to premiere.

Power slap is on schedule still for the 18th of January but reporter Jeremy Botter cast serious doubts on the event.

“A Warner Media source tells me Dana White’s Power Slap series is no longer listed on any internal programming schedules and all ad spots have been dropped. The death of the deal, I’m told, is basically just paperwork at this point.” 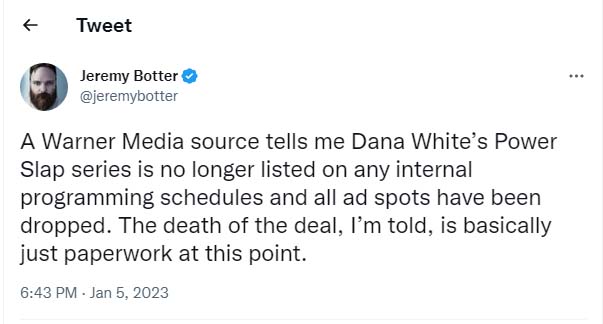 Trade publications including Deadline and indiewire cite that the premiere has been delayed.

Yesterday, Deadline posted an article questioning Endeavor CEO Ari Emanuel’s response considering he has taken a tough stance on the bad behavior of stars such as Kanye West and Mel Gibson but has not commented publicly on the incident, which involves one of Endeavor’s main business interests. Endeavor now has a 100 percent controlling interest over UFC.