Dana White’s slapping scandal came to light yesterday when UFC boss got the chance to try and spin the story in a softball interview with TMZ. Make no mistake this is domestic violence and not an isolated incident in which both parties bare the blame.

And while UFC’s streaming partner ESPN refused to comment on the matter they did publish an article titled “UFC’s Dana White apologizes for physical altercation with wife”.

Prominent MMA writer Trent Reinsmith reached out to them for a comment and was redirected to UFC. 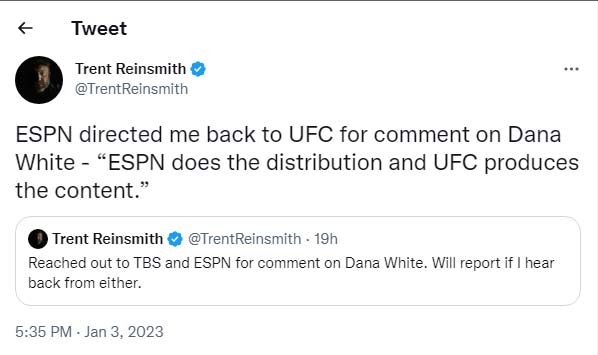 But Power slap league might not be as lucky. In fact, Business insider poked fun at White with the following headline: “There is never, ever an excuse for a guy to put his hands on a woman,” Power Slap founder Dana White said. But his new business venture might bear the brunt of the damage. TSN reporter Aaron Bronstetter was the first to cast doubt on Power League’s chance of getting cancelled before it even aired.

“While there has been no statement from TBS on the matter, the Power Slap premier episode cannot be found on the TV listings (it is still on the schedule on TBS’s site) and the show’s page on the TBS site is empty, but I cannot determine whether it previously contained content.”

This prompted us to investigate. If you google TBS power slap the top result is page on their site dedicated to a schedule. But the website is now bare.

It’s hard to tell what was previously on there.  The show appears to still be on the schedule for 11th of January.

Turner Sports has yet to comment on the matter. Requests for comment have received no response thus far.