Dana White’s Power Slap League is making headlines for all the wrong reasons. Slapping is a controversial sport, and White’s organization is now under a new wave of criticism for its surprisingly low athlete compensation.

“I was contacted to do slap league, you guys would be shocked at how much it pays… First fight was 2k and 2k.”

MMA commentator Luke Thomas also said that he had seen proof of the offer that Spicely had received from the Power Slap League.

“For folks asking if Spicely was specifically invited to the Power Slap League, I followed up with him before posting. He said he was and showed me some evidence for his claims.”

Spicely emphasized in later tweets that he declined the offer, which he believed to be a three-bout contract. Spicely continued by saying that the show winner is probably going to be paid $10,000. 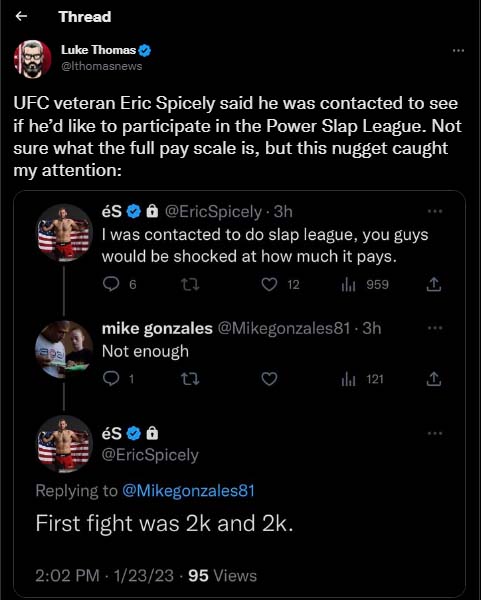 In September 2021, Eric Spicely competed in his last MMA outing under the OKTAGON banner and lost through first-round TKO. After a weight-cutting disaster resulted in the cancellation of a match against Markus Perez in August 2020, he was released from the UFC.

Dana White has come under fire for venturing into a field of sport that is considered foolish because it gives competitors little room to defend themselves. The Power Slap League premiere was delayed by a week. However, it ultimately aired on TBS on January 18.

Some of the comments by fans are as follows:

“Dana must be stopped”

“If Dana can also somehow write it into the contracts that all participants give up their right to vote forever, I think I’d chalk this venture up as a W.”

“Power Slap is gonna crash and burn. I did find the first episode quite entertaining, but it also made me realize how much I miss TUF”