The Nevada Athletic Commission approved a request to recognize slapping as a state-regulatory sport.

Before the year is through, the Dana White-owned Power Slap League, a slap-fighting organization, plans to make its debut. Slapping event will give UFC president White another combat sports promotion to add to his resume. The many viral videos that have been spreading on social media in recent years have contributed to the growth of the new sport.

The Nevada Athletic Commission and Schiaffo LLC, a business run by White, met to determine if “such contests or exhibitions qualify as unarmed combat … and thus fall under the jurisdiction of the Nevada Athletic commission.”

After giving a presentation to the NAC, UFC Chief Business Officer Hunter Campbell received their approval for the new sport to be monitored and governed by the state organization.

To properly test and understand how this might perform as a genuine league and real sport, Campbell said, “

We’ve spent the last year sort of beta-testing this in a controlled environment to really test and see the dynamic of how this would function as an actual league and real sport.”

“What we’ve found is that this is actually a skill sport that the participants, who are at a high level in this, are skilled athletes in. They train. They’re in good shape. They take it seriously, not dissimilar with what you see in MMA and boxing.”

Campbell said that they had no plans to arrange any stunt pairings. In order to prevent any major injuries, he also emphasized the need to have the proper medical infrastructure in place.

“Again, our approach was similar to the UFC: Move toward regulation before this is an actual thing.” He added,

“ With any sort of combat when you’re taking shots to the head, to have it done in a way where there isn’t medical procedures and regulations put around it is an unsafe environment. The second issue is integrity of the sport.”

“The other thing that we’ve seen is, you’ve seen instances where a guy might be 400 pounds, and he’s slapping a guy who’s 130 pounds. That’s also not what we’re looking to do.”

The introduction of the events is expected to take place at the UFC Apex before the end of the year. They are intended to be “an identical template” of UFC events. The new promotion, which will premiere as a television competition series, is also allegedly nearing an agreement with “a major network partner.”

A number of MMA analyst and personalities condemned the move. And here’s why. While the entertainment value is clearly there there is no space for the participant to defend against the pending brain damage. 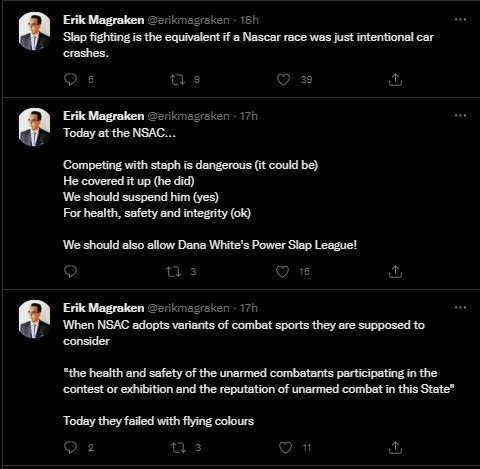 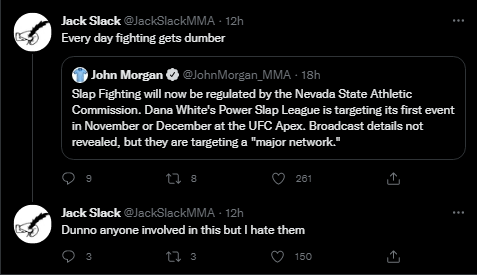