Mike Tyson recently went on a tweeting spree blasting media network Hulu for distributing an unauthorized series based on his life.

Tyson was dismayed that the network would go on to make a series based on his life yet not pay him the rights or want his input.

Tyson’s backlash against getting exploited was supported by Nate Diaz – and Dana White.

While Diaz was repeatedly exploited by UFC which even tried to sell 420 NFTs featuring Diaz, White is not so enthusiastic when it came to promoting a series that would see his friend Mike Tyson get exploited. 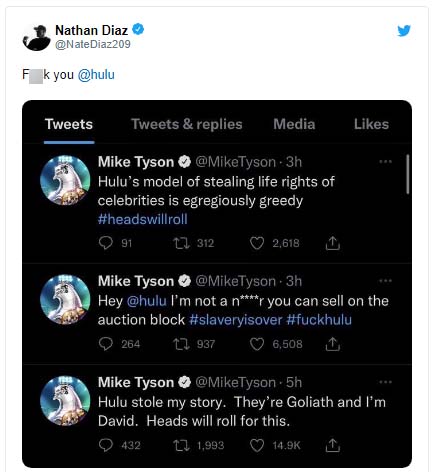 “We were on the verge of a deal with Hulu to promote this Mike Tyson unauthorized biography or whatever it is. And Craig Borsari, my head of production, came to me and said, ‘Hey, I’m hearing that Tyson isn’t happy about this thing.'”

Tyson was thankful for the support.

“Hulu tried to desperately pay my brother @danawhite millions without offering me a dollar to promote their slave master take over story about my life. He turned it down because he honors friendship and treating people with dignity. I’ll never forget what he did for me just like I’ll never forget what Hulu stole from me.”