Dana White has his Irish background to thank for his reddish looking complexion. However perhaps White would go red less often if he told the truth every now and then.

White was in the focus of attention all week thanks to Khamzat Chimaev’s weigh in snafu that almost caused the entire card to get cancelled.

There was a lot of talk about what the UFC would be willing to do to save the card – with some clearly contradictory statements out there.

For starters, ‘Chimaev was made to stop cutting weight’ by the doctor – this is what both Chiamev and White said at different times this week. However Chimaev’s own coach said he pulled the plug on weight cut.

At the press conference afterwards Dana White was asked who received the most significant pay bump following the shuffle and White made it a point to lie and claim the following:

“I know you would never tell us the numbers, but is there any particular fighter out of the six that maybe benefited the most with agreeing to take these new fights?”

“Who got the biggest bump? Well, these guys all have deals.”

So none of the money changed for them to to switch the fights. They just took the deals going in?

“Everybody has a deal.”

And meanwhile Kevin Holland posted this on instagram during the renegotiations – and was visibly amped for the event despite his utter inability to wrestle. Anyone with two eyes can see that there’s definitely a much bigger incentive in taking on Chimaev than Daniel Rodriguez.

And we’re not the only one to have noticed. MMA’s leading journalist Ariel Helwani called out White for it.

‘1000% not true. Not sure why one would lie about this — each one of those guys deserves a pay raise — unless, of course, you didn’t want to set a precedent the next time a card gets shuffled around at the 11th hour.’ 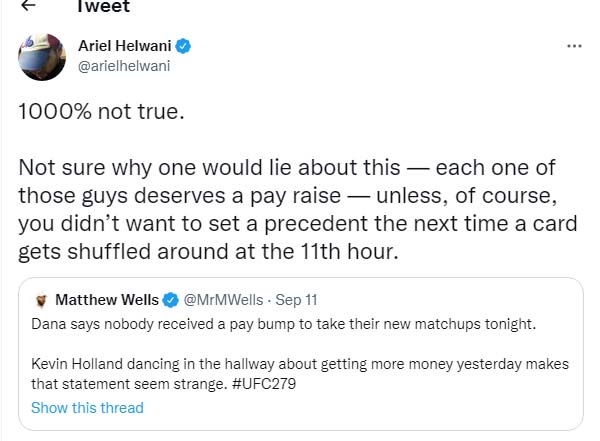 Meanwhile Nate was asked how much he got paid for the new main event and he just said “I lost count”.