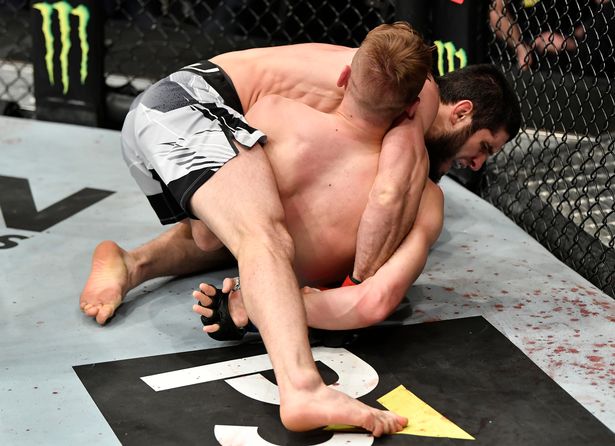 Islam Makhachev is being labeled as the brightest star in the UFC after his remarkable performance at UFC 267 against Dan Hooker. The Russian has cemented his position as an up and comer in the UFC lightweight division.

With elite grappling skills, he forced Hooker to submit to a brutal kimura lock in 1st round. The fight lasted for only 2 minutes and 25 seconds.

The New Zealander has only 1 win in his last 4 fights. The first two losses were against top-notch fighters Dustin Poirier and Michael Chandler.

Before Islam fight, Hooker won against Nasrat Haqparast via unanimous decision. He signed up to fight Makhachev as a result of Rafael dos Anjos’s withdrawal on short notice.

Islam says that Dan agreed to for a quick payday.

Currently, #8 ranked lightweight fighter, Dan Hooker has shared his feeling about his loss against Islam. In the loss Hooker was incapacitated with his one arm stuck in a kimura and the other beneath him  – and had verbally submitted. This is something the New Zealander contends was not a good choice.

During a recent pub sit-down with The Mac Life’s Oscar Willis, the #8-ranked lightweight discussed his mistakes. He suggested that most of the reasons that led to the loss came through his blunders rather than Islam’s utmost grappling style.

“What happened, happened. That whole thing’s self-explanatory… I wouldn’t say (I made) one little mistake, it was a series of mistakes… mistakes that, just shouldn’t have been made and that’s completely on me. I’m the one that has to bear the brunt of that, which I will.

“I would just say he’s super patient. He got the takedown, which was my bad, secured the takedown; my bad again. That’s two of the many mistakes. But yeah, he was just quite comfortable waiting there. Again, (I) tried to force it a little bit too much, like, getting back up… I wasn’t comfortable just sitting there and staying there for the next three minutes.”

The force of the kimura wasn’t tolerable for Hooker as he appeared to be in pain and upset with the referee. Hooker admitted that the referee might have intervened as he shouted ‘’Ah fuck’’ accidentally. Later, after the stoppage, he told the referee that he should have let Islam break his arm.

Dan Hooker will now look to return in 2022 as he crashed to carry on the winning momentum against Haqparast.

With this victory, Islam Makachev successfully continues his 9 fight winning streak. This is one of the longest active win streaks in the lightweight division, next to Charles Oliveira who is on a 9 fight winning streaks. Besides them Beneil Dariush is on a 7 fights winning streak. His MMA record stands at 20-1.   Hopefully, this can be a lesson for all the refs out there to pay more attention to the fighters in the octagon.

Khabib Nurmagomedov telling Islam Makhachev to move his leg over Dan’s head to secure the submission! Khabib is truly a genius when it comes to grappling!#UFC267 pic.twitter.com/Uw7oprowwb

Many including prominent MMA influencer “Anatomy of a fighter” filmmaker Will Harris neglected MMA history in order to praise Khabib for this move. In a since deleted tweet he – the technique was falsely attributed. Luke Thomas was one of the first to point out the lengthy history of the move.

“This is the standard move to finish a kimura from this position. Khabib did the right thing to call for it and he’s obviously a phenomenal grappler (as is Makhachev), but this isn’t some amazing innovation. This is common knowledge among even intermediate grapplers.”

This is the standard move to finish a kimura from this position. Khabib did the right thing to call for it and he’s obviously a phenomenal grappler (as is Makhachev), but this isn’t some amazing innovation. This is common knowledge among even intermediate grapplers. https://t.co/8k4sVlwYO0

Here’s Phil Baroni in 2006 and Frank Trigg/Mauro Ranallo on commentary were talking about the need to step over the head the entire time he attempted it, which started long before what’s shown (check FightPass if you don’t believe me).

Khabib is a genius, but not for this. pic.twitter.com/xhTQO3Krn7 — Luke Thomas (@lthomasnews) November 1, 2021

Here’s Joe Rogan talking about Mir stepping over the face of Nogueira to secure the final step.

Again, if this is new to you, that’s OK. Nothing wrong with that, but if we are going to heap praise on fighters for their technical acumen, we have to be accurate about what they did pic.twitter.com/OOOuSTdnPu — Luke Thomas (@lthomasnews) November 1, 2021

And of course Ryan Hall’s open elbow dvd – released in 2015 features this exact finishing strategy. One additional note interesting to observe is Makhachev attempt to rebrand a jiujitsu staple. After his victory Makhachev said:

“What I do is not Jiu-Jitsu nor Grappling, it’s MMA ground game and I have the best in the division.”