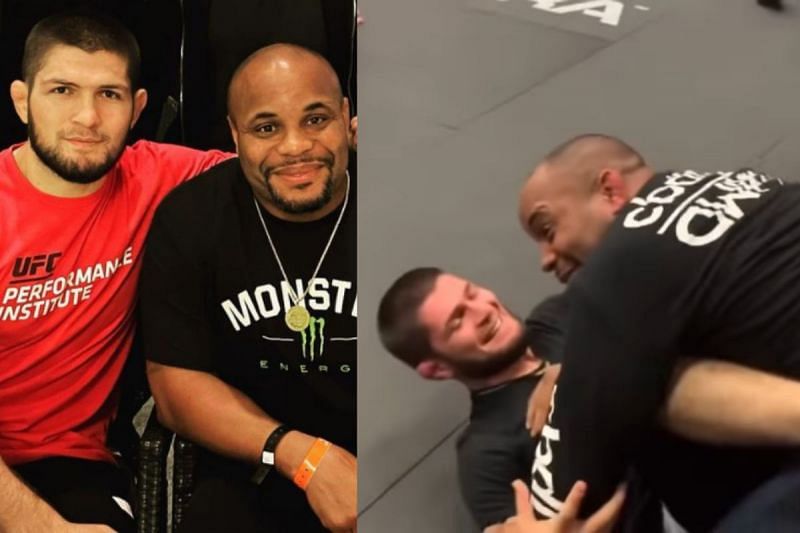 Daniel Cormier and Khabib Nurmagomedov have been real life friends for a long time. They share an exceptionally cheerful bond. Cormier and Nurmagomedov met at the American Kickboxing Academy in San Jose, California. Khabib’s programming into American culture happened at that gym where DC and he became good friends.

DC recently showed a glimpse of the friendship to the world in a video clip  he shared on social media. He was seen using pro-wrestling moves and having a fun time with The Eagle.

DC was seen wearing a mask similar to the Mexican pro-wrestlers. On a global scale, the mask has been preserved by Rey Mysterio and Sin Cara.

While DC’s fighting days are behind him – he clearly misses the good times and training behind AKA walls.

Internet is full of videos showing DC and Khabib involved in friendly grappling mixed with their competitive attitude in them. Although Cormier has a lead – being a light heavyweight fighter and substantially bigger – when it comes to competitiveness, Khabib never gave up. Khabib constantly makes an effort to push Cormier to tap out.

Both seem to have respect for each other and appreciate each others skills. In fact Nurmagomedov even went toe to toe with one of Cormier’s wrestling students in young Chase Saldate some time back.

“He’s just a beast-man. You felt it, I felt it — when I grab a guy that fights at 155 and I go, ‘man, he feels strong,’ it’s crazy. That should not happen. He should not feel strong to me whenever I grab him, but he is,” Daniel Cormier told Mike Swick regarding Khabib on a podcast.