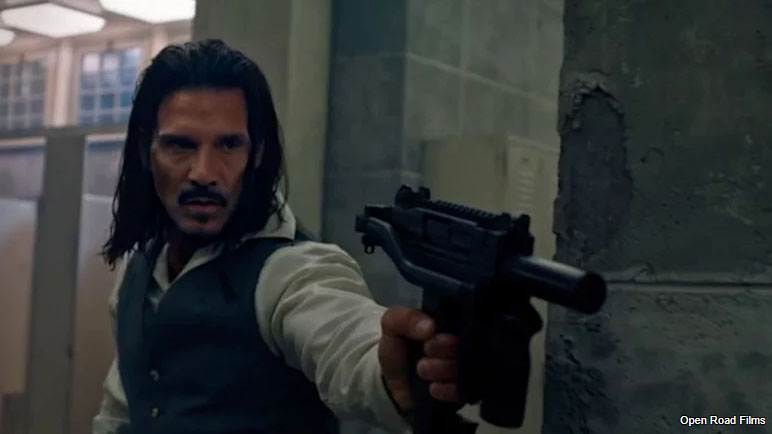 Frank Grillo is one of the stars of the new shoot them up movie – “Copshop”. Copshop has been described as “nasty, nutty slaughter fest” among other things. Joe Carnahan’s Copshop is set in a police station in Nevada where a wounded, man-bunned sleazebag named Teddy has just managed to get himself under lock and key after deliberately punching rookie police officer.

Grillo told the interviewer he credits bjj for his action performance:

Absolutely. Listen, martial arts, specifically Jiu Jitsu, for me, the discipline, the gentleness, the breathing, everything, I incorporate all of it. The way I carry myself into how I work. How I move in front of the camera has a lot to do with how I’ve trained in the martial arts and how comfortable I am inside of my body. A lot of actors are not comfortable. You can tell they’re not physically comfortable. They don’t know what to do with themselves. Martial arts, it’s changed and saved my life. Without martial arts I wouldn’t be sitting here talking to you.

It really does. Also, knowing that I could kill all of the people. I’m kidding you [Laughs]. I think you’re right. Look, I think it’s natural for men when they get aggressive or they get passionate about something, it’s ego. But when you train in Jiu Jitsu, it’s exactly that; it’s you learn to flow like water. You learn to be the palm tree, as he used to say. It’s 80 mile an hour winds and the palm tree is not going to fight the wind. It’s going to bend that way, then it will bend that way, and then it’ll get straight, right?

It’s the same thing. I can sit here and argue with this guy for 10 hours about who’s right and who’s wrong. It doesn’t really matter. It doesn’t really matter, so try to be the palm tree. Now I fail sometimes and I become rigid. Then I realize I’m not breathing or I’m breathing short breaths and I’m rigid. Nothing good is going to happen from it. So things like that are great lessons in life. When you take what you learned in the martial arts and Jiu Jitsu, for instance, and you apply it to your life, it really, really does work.

And in fact Grillo has been a student of Rickson Gracie since the mid 90s.