This time he went ahead in his feud with social media sensation Hasbulla Magomedov and challenged him to a sparring contest with big gloves. Hasbulla has yet to respond to his tweet.

Conor McGregor is famous for his trash-talking and has been doing it for years. McGregor had a beef with Hasbulla since the Russian sensation developed a friendship with Khabib Nurmagomedov, a bitter enemy of the Irish MMA star.

Conor McGregor has been out of in-ring action since his last match against Dustin Poirier, where he suffered a leg injury. He did not provide a return date yet, but rumors are that he will return sometime next year. 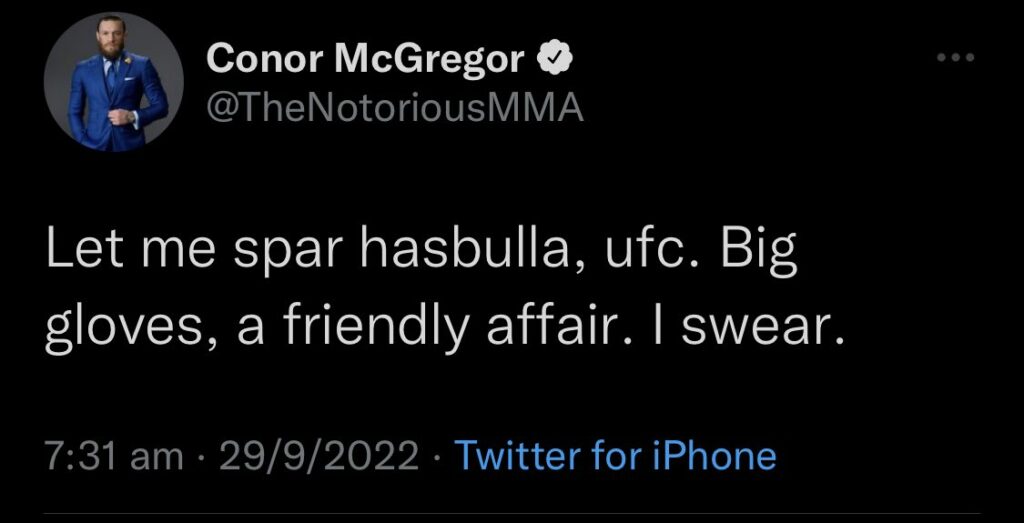 “Let me spar Hasbulla UFC. Big gloves and a friendly affair, I swear.”

Conor and Hasbulla bashed each other on social media in the past.

Hasbulla uploaded a video on his social media account a few months ago where he was seen with a chicken he named Conor McGregor.

McGregor responded in a problematic fashion. 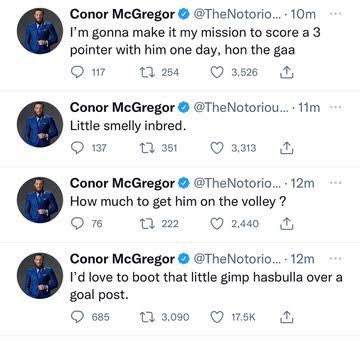 “I’d love to boot that little gimp Hasbulla over a goal post. How much to get him on the volley? I’m gonna make it my mission to score a three pointer with him one day, hon the GAA.”

“Kicking a ball over the posts in Gaelic football is one point, while scoring a goal is worth three.”

After this, a response from Hasbulla was inevitable. Hasbulla, who recently signed a contract with UFC, came back strongly with a challenge to Conor McGregor.

He said,
“I have my UFC contract now, if Conor McGregor is really a man… see me in Abu Dhabi. Got smashed by Khabib already. Guess his money from Mayweather ran out and he needs more attention.”

Hasbullah then returned for a final time and vowed to eat Conor Mcgregor. He stated,
“Hey uncle @danawhite and @ufc please make it happen, let me eat this chicken @TheNotoriousMMA. I’m hungry, I’ll smash him with my mountain spirit. My brother @TeamKhabib smashed him and all his team, now is my time to rise! #HasbullaTime #CantDeleteMyTweetsConor.”

This is a clear case of the two (social media) stars bouncing off of each other for attention and notoriety but we still can’t help but wonder if McGregor could’ve found a more apt target.

Hasbulla signed a UFC deal based solely on his media representation. And is rumored to be getting paid more than many of UFC’s finest athletes shinning the spotlight on harsh realities of being involved in the sport of Mixed Martial arts.