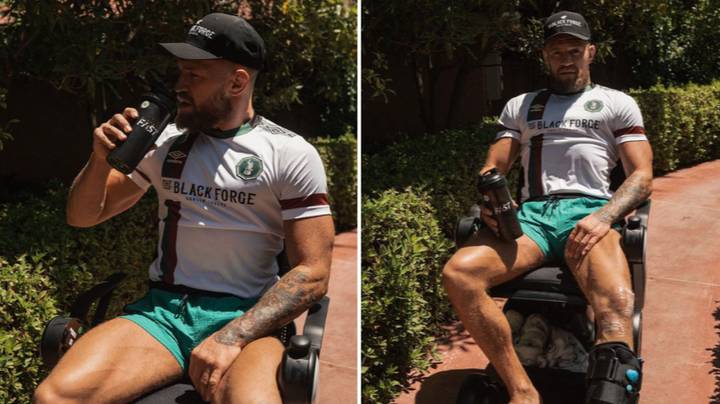 After suffering a severe leg injury in his fight with Dustin Poirier in July of this year, the infamous UFC fighter Conor McGregor has been in recovery and  inactive for around 4 months. Many questioned the likelihood he’ll even return. And nobody was really sure when will be back. Finally, The Notorious confirmed injury rehab is going better than expected and shed some light on the subject.

On Saturday, one of the fans asked McGregor about when he was targeting to be fully back and ready to step back in to to the cage. McGregor was kind enough to provide a response

“I will be full mixed martial arts sparring by April. Easily! By then a return will be imminent. But I must be patient. I will beat this!” Wrote McGregor on his Twitter account.

I will be full mixed martial arts sparring by April. Easily! By then a return will be imminent. But I must be patient. I will beat this! https://t.co/KmgS9oa9Tv

The Irish sports star fractured the tibia and fibula of his left leg at UFC 264 after the first round ended. His doctor declared that McGregor couldn’t continue the fight and Dustin Poirier won their 3rd fight.

Michael Chandler said he would love to fight McGregor on Twitter and McGregor also implied that he doesn’t mind fighting Chandler.

The rising star Khamzat Chimaev who fights in the welterweight division also called out McGregor on Twitter inviting him for a big drama show. A lot of fans also want to see McGregor vs Diaz trilogy.

McGregor himself not being picky said he will fight anyone who holds the lightweight title. This is of course more than optimistic considering he hasn’t been able to get a win over any top rank lightweight fighters since 2016. His last actual victory comes from a quick KO over Cowboy Cerrone in 2020.

Of course McGregor was also very lucky with his recovery – Chris Weidman underwent a similar injury and operation earlier this year – and had to get a 2nd surgery subsequently.