Joe stated: “[Conor’s] taking his shirt off and posing constantly, and he looks like his piss would melt that USADA cup. Like, it would just like burn a hole right through the bottom of that USADA cup.”

Conor McGregor is reportedly furious about this comments despite the fact he personally pretty much confirmed that he couldn’t be taking whatever he’s taking to recover if he were in the USADA pool.

Although it’s obvious that Rogan was joking, McGregor doesn’t find it amusing at all.

In reaction, Conor tweeted a now-deleted image of Rogan with an absurd amount of muscle with the caption: “Joe looks like his piss melts his knickers, in the company that long and never took a fight hahaha @ufc oh tae kwon do competition, call the cops hahahahaah” 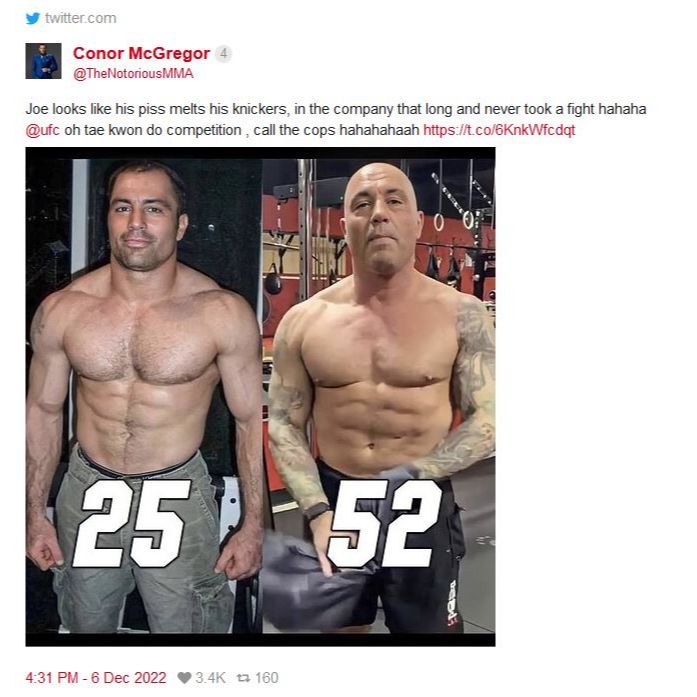 Apart from those tweets, Conor also took a jab at Rogan over how he commentated UFC 229.

McGregor posted a clip from his famous match against Khabib Nurmagomedov at UFC 229 in 2018. The short clip displayed McGregor kneeing Khabib’s head while both of them were on the ground. His intention might be to boast how he hurted Khabib, but fans were quick to comment about it being an illegal move. Joe Rogan’s voice from the commentary booth can also be heard talking about it, saying, “illegal knee on the ground by Conor”.

“‘That was an illegal knee on the head of a grounded opponent.’ Shut up Joe, you little fool. What are you talking about, ‘Smash this and smash that?’ I was smashing my knee into his f***ing eye socket, yeah? ‘That’s a knee to a grounded opponent, call the cops’.” McGregor continued by a hysterical laugh.