Conor McGregor has been busy promoting Dana White’s Power Slap League on social media and has even playfully challenged Nate Diaz to a slap-off.

McGregor and Diaz’s rivalry is widely known. Despite being deadlocked 1-1, a trilogy bout between them never happened. While McGregor has been out of action since July 2021, Diaz is now a free agent.

“This power slap championships is growing on me. Who doesn’t like watching good quality clatters hahaha. Is it a flip of a coin who gets to go first? How long do they have to recover before they get to throw their counter? Or is it over if they’re KO’d? Fascinating. I’m attending one of these 100%. Is this Dana’s? Wtf is this madness Dana hahaha. I’m in.” 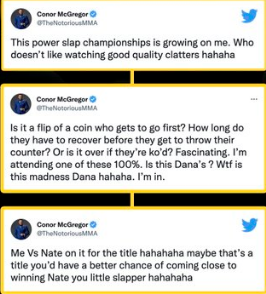 McGregor continued by joking that Nate Diaz and he need to compete in White’s newest project.

“Me Vs Vs Nate on it for the title hahahaha maybe that’s a title you’d have a better chance of coming close to winning Nate you little slapper hahahaha.”

I already beat you at that game too 👋 @TheNotoriousMMA @danawhite pic.twitter.com/Otb5DZJULt

If submissions weren’t allowed
I knocked you out way faster than Floyd did 😴 pic.twitter.com/yy66rBsXFi

Even though Diaz is a free agent, his manager Zach Rosenfield relayed back in November that the Stockton native is still interested in a third match with McGregor.

“Nate is going to be looking at the biggest fights possible. He has stated that completing the trilogy with Conor McGregor is something that interests him, and that has not changed.”

Diaz is reportedly fielding another lucrative offer from BKFC – but he’s been silent on the topic. BKFC president told media:

“Talks are great with Nate Diaz. We’ll see what happens. We’re going to have an answer here in the next week or two but great talks with his management team. The offer is a very legitimate good offer for him. I think it’s better than he’s got anywhere else. So, I’m not saying he’s definitely coming but I definitely wouldn’t be surprised to see some of his blood on this canvas one day.”