Conor McGregor has spoken out regarding Jake Paul’s new multi-year contract with the PFL. McGregor offered a different perspective on Paul’s decision to give boxers in the promotion’s new pay-per-view series a 50% revenue share.

Paul was called “Numbnuts” by McGregor for giving up half of a future payment. In a since-deleted tweet, The Dubliner stated:

“Numbnuts gave away 50% of a future purse if he does an MMA bout? Wow. What an idiot. Joint partnership what? For what you Wally. Wally.” 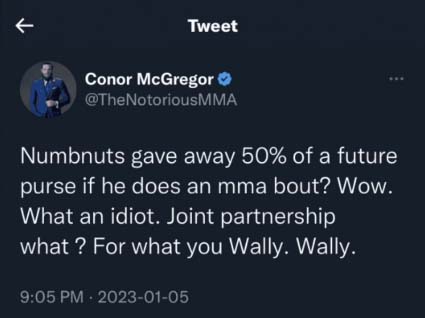 A multi-year agreement between the two parties that was disclosed on Thursday resulted in Paul becoming a stakeholder in the PFL. Jake Paul will make his MMA debut in the new pay-per-view Super division of the company, which he co-founded.

Paul is a well-known supporter of the drive for fair compensation in MMA. He said that mixed martial artists in the new division would get 50% of the revenue share. Additionally, it seems that they will be able to profit from their own sponsorship deals.

Since Jake Paul’s entry into the realm of combat sports, the two have traded insults on several occasions.

Donald Cerrone is the only opponent Conor McGregor has defeated since 2016. He has called out Jake Paul for a boxing match. Jake Paul rejected the match-up.

Paul is not exactly a novice when it comes to business dealing so it will be interesting to see how the deal develops.