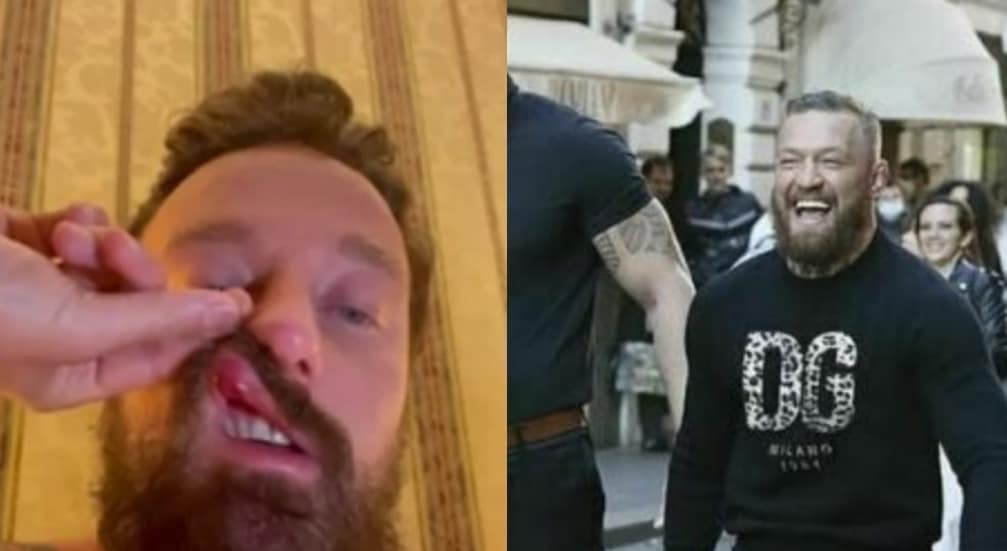 Trouble seems to follow Irish sports star Conor McGregor everywhere. The latest emerging scandal seems to be tied to McGregor’s short vacation in Italy. According to his own social media he’s attending some fashion related events in Italy. But that wasn’t all – McGregor apparently also went to a local party and got into a shoving match with a domestic celebrity.

“Suddenly he threw a punch in the face of Francesco”: tells the alleged victim’s wife on social media – in a story on Instagram. 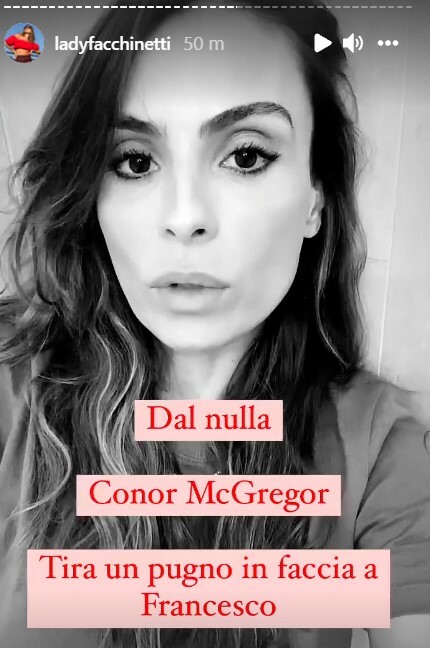 The wife of Francesco Facchinetti alleged that Conor McGregor beat her husband.
“He could have killed him, he split his lips and nose – the story of Wilma Helena Faissol – Francesco flew back, fell on the table … and I’m shivering like a calf.”

The woman explained that they were at a party in a hotel in Rome, where the evening seemed normal. Then it escalated and the reason is not at all clear.

“The first thing I thought is a joke, they do it on purpose, it’s a mini-show – Faissol said – but I was paralyzed because all Conor’s bodyguards held him against the wall, he wanted to keep beating Francis. There was blood, the bodyguard gave us handkerchiefs and kicked us out. From the hotel they let us out the side door, as if everything was fine. I was crying, I was shaking, we called the police and ambulance. We made the complaint, he is an unstable person: he is dangerous » – she concluded on social media

Prior to the event McGregor was at dinner with Jose Mourinho, celebrated soccer coach: “He is a legend”

Conor McGregor walks like a star in the Center: bodyguards and autographs

Facchinetti – Francesco Facchinetti also posted a story on Instagram: “Mr. McGregor broke my lip and nose, he attacked me for no reason – explains the artist showing signs of violence – I could be silent but someone like him who pulls a punch, think what could happen. It worked out for me. He is a violent and dangerous person. I decided to sue Conor McGregor, be very careful ”

And followed them up with social media posts: 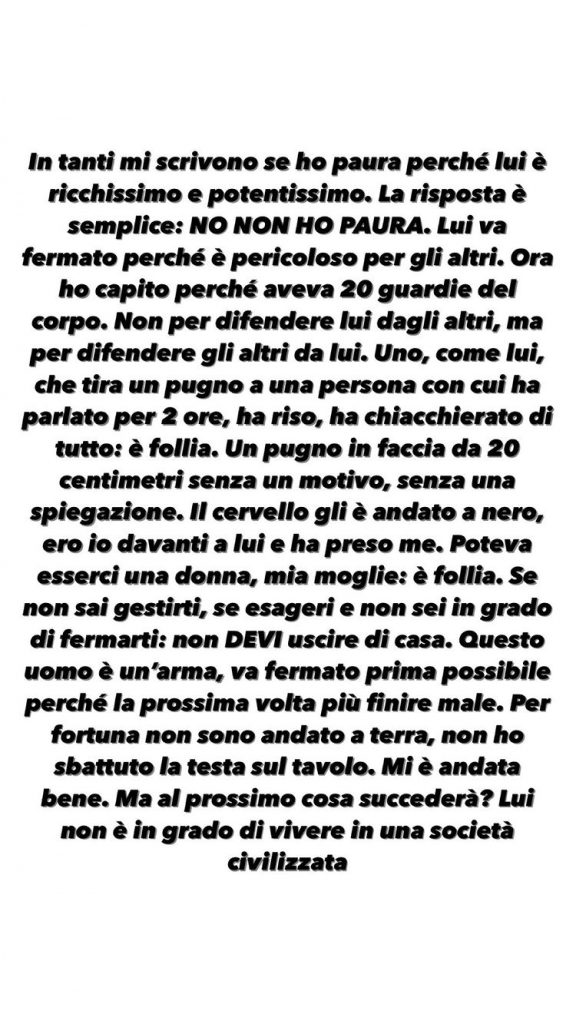 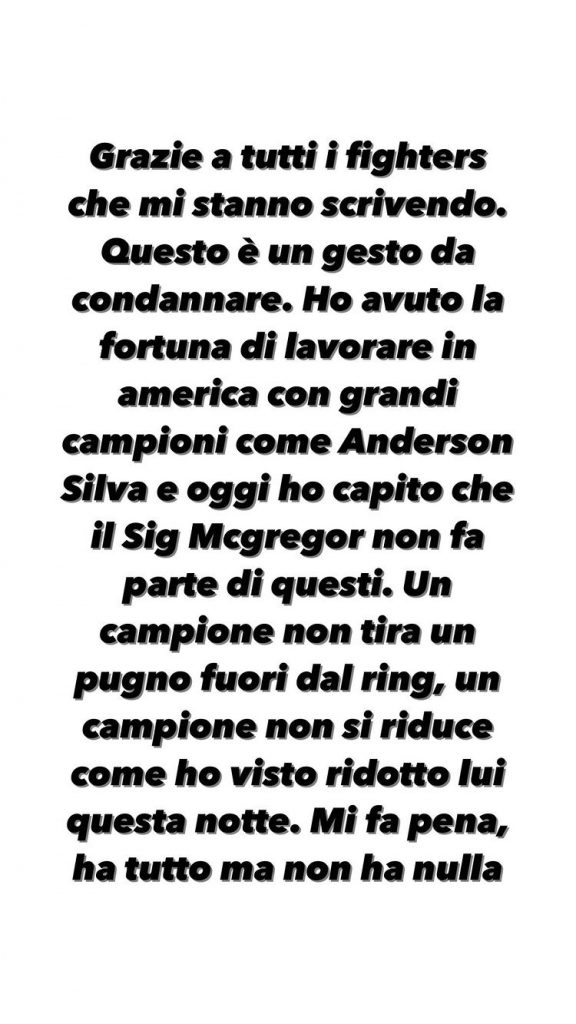 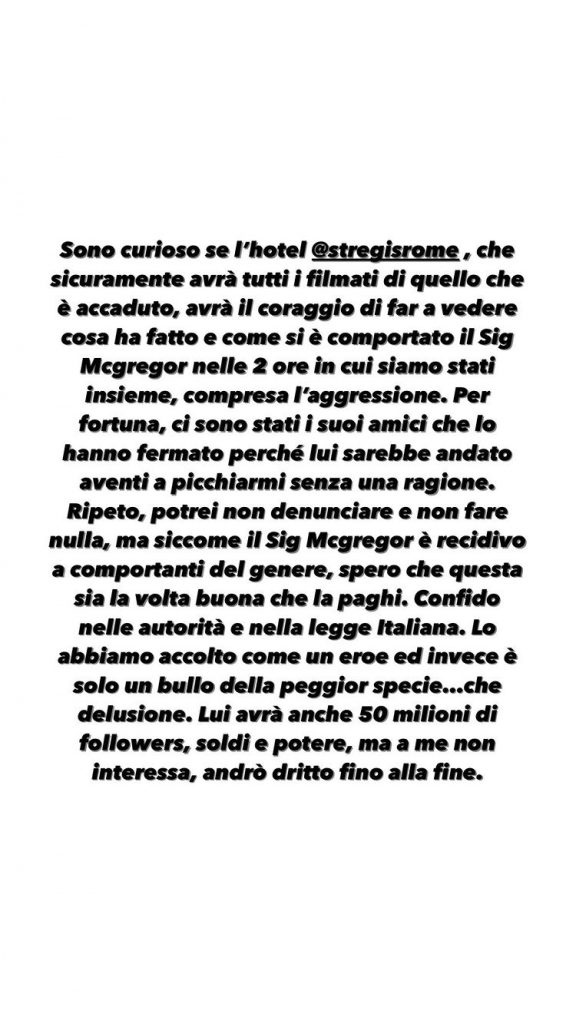 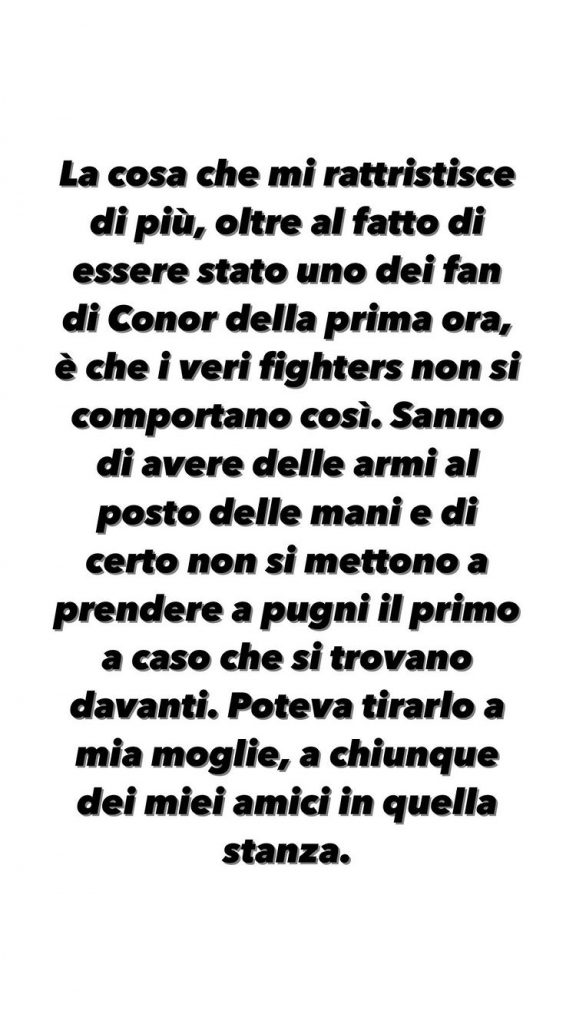 Facchinetti shared a series of stories in Italian, detailing what happened and showcasing the injury he’s alleging he suffered in the confrontation with the biggest star of Mixed Martial Arts In the world.

Italian outlet ilmessaggero.it was the first to report on the incident.

I’m Italian (from Rome), it seems like he actually punched Francesco for no reason, there is video proof and all by the hotel where they were staying but it hasn’t been released yet. They were talking for about 2 hours before it happened.