In the last few years, Brazilian Jiu-Jitsu has seen a meteoric rise in popularity. And not just with regular people; more and more celebrities are getting involved in jiu-jitsu.

Chris Hemsworth, for instance, has been spotted at the IBJJF Pan Pacific event cheering on his children. His kids’ trainer is Thalison Soares.

Chris Hemsworth, currently one of the most famous actors in the world, was recently spotted at a BJJ event cheering on his two children.

When Hemsworth’s children participated in the event, he posted a photo from another competition to show how happy he was for them.

“Super proud dad moment watching my kids at their first jiu-jitsu tournament.
Big shout out to coach Thalison Soares for his amazing leadership and support with all his students.” Hemsworth said in the post.

Hemsworth is extremely devoted to his family life, as evidenced by his marriage to Elsa Pataky, a Spanish model and actress, in 2010. India Rose, their daughter, was born in 2012, and Sasha and Tristan, their sons, were born in 2014.

Despite all that many shade Hemsworth for monstrous physique and suspect a lot of his extraordinary looks could be attributed to PED use. Joe Rogan even commented on the matter adding :

One of his sons appeared as a young Thor in his most recent film, Thor: Love and Thunder, and his daughter played Love, Thor’s adopted daughter.

Hemsworth is an Australian actor who catapulted to popularity as Thor in the MCU and has continued to portray the part in eight full-length films over the course of eleven years, showing no signs of retiring from it. 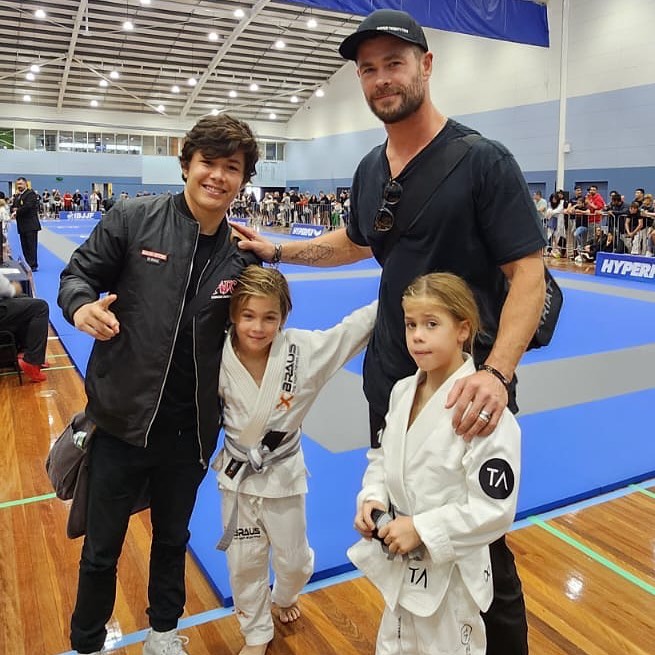 Since then, he’s become a household name thanks to his lead roles in critically acclaimed films including Rush, Men in Black: International, The Cabin in the Woods, and Snow White and the Huntsman.

IBJJF’s official Instagram account included a photo of Chris Hemsworth cheering on his children at a BJJ tournament alongside their coach, Thalison Soares.