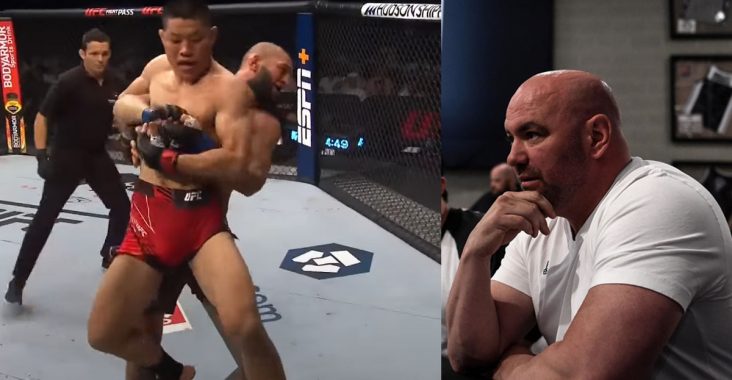 The Swedish powerhouse stole the show as he dominated Li Jing Yang before submitting him via a rear-naked choke in the third minute of the first round.

Chimaev did not even absorb one strike from his opponent. The whole crowd was in awe at which he won the bout. He lifted Ji Lang and took him to the corner of the cage where he requested Dana White pay attention to his fight rather than looking into his phone.

The commentators labeled him a dark horse and a potential title contender. After this victory, Chimaev was asked about his next opponent to which he replied “Everybody! Everybody! I come here for everybody. Kill everybody! I am the champ. I am the king.”

Many UFC experts have indicated that Chimaev might finally be the guy to stop Kamaru Usman. With a current record of 4-0 in the UFC, Chimaev fought 3 times last year before a long break due to a bad case of Covid-19.

He returned after 13 months without a hitch. However Dana White was quick pour water on the rumor that Chimaev is next title contender in the welterweight division.