Carla Esparza opted to not postpone her wedding when she signed on for UFC 274. This meant the last week was very stressful for the, again, UFC strawweight champion.

Not only did Esparza have a funny Bachelorette party during the height of her camp – but she also opted to take the belt with her down the isle.

Esparza explained her decision to not move her wedding date despite being in camp:

“Fight and wedding are one week apart ??? ??. When I was offered this fight date, I immediately said yes. There was no hesitation. This fight would take priority over everything, I was even willing to change my wedding date knowing that my fiancé, friends, and family would understand.”

“Well, since the wedding is the week after the fight, I had a choice to make. And to be honest, I was really struggling with the decision of whether or not to change my wedding date. Everyone wants to look and feel beautiful on their wedding day. I went to my fiancé, and what he told me sealed my decision. ”

“He said, “honey, if you have bumps or bruises, that’s perfectly ok with me, I knew what I signed up for when I asked a fighter to marry me. It’s part of your job. I think you are so beautiful, but I am not marrying you just for your beauty. I’m marrying you for <insert mushy stuff lol>.” I am just so grateful to have this support from my amazing fiancé Matt. Te amo mi amor , can’t wait to marry you

During the interview following UFC 274 Esparza confirmed she would be taking the belt with her to be a part of her wedding ceremony.

“I’m gonna walk with this belt down the aisle as my something new,” Esparza said. “It’s gonna be wrapped around my wedding dress. What cooler piece of jewellery or accessory can you have than this belt?”

The belt was reportedly her ‘something new’ on the walk down the isle.

Esparza is not alone in having taken a UFC belt to a wedding. Prior to her, TJ Dillashaw posed with his UFC belt during his wedding festivities. 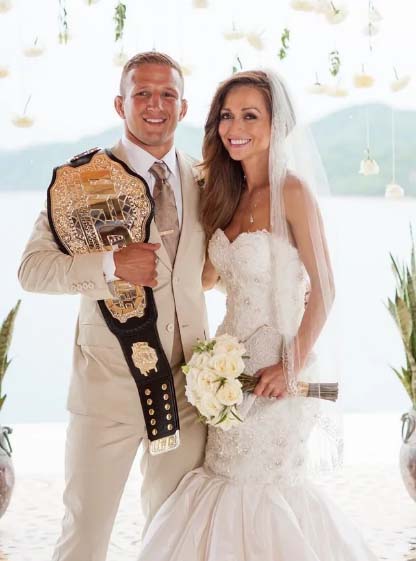 Of course, neither of them can match the level of dedication Tim Sylvia had when accessorizing. Some years back, he revealed he had intercourse while wearing the belt.

“I’ve had sex before with the belt on. That was back in the Ricco Rodriguez days. The night I won the belt I had a sexual experience with the belt on. But hey, I was 25 years old and it was the biggest thing that ever had happened to me in my life. The girl was like hey, are you going to take that thing off. And I said no, I’m not…I’m wearing it and if you have a problem with it, then I’m leaving.”