Brendan Schaub’s ‘star’ is on the downfall and he’s used the recent conspiracy theory to try and reinvigorate an old beef.

Over the weekend there was a lot of drama stemming from the fact that UFC veteran Pat Miletich and Brendan Schaub put out conspiracy theories claiming that Chimaev missed weight on purpose.

Miletich’s theory questions whether a longtime wrestler out of a draconic territory such as Chechenya would miss weight by 7.5 lbs by accident.

“I’m pretty sure the card was not selling well on pay-per-view. And they told him, ‘Miss weight big so we can put you against Holland. Because this thing is not selling. We gotta shake things and cause a scene”

Schaub piggybacked onto this.

Dana White went on to call them both lunatics.

“Like Pat Miletich was saying, we told Khamzat not to make weight because we weren’t selling tickets. The f***ing show was sold out going into that day of the weigh-ins. I don’t know if Pat really said that, but if he did, he has to be the dumbest m*therf***** on the planet.”

“I mean, you know how stupid you have to be to even think something like that, let alone say it publicly and act like you’re serious… If Pat really said that, holy s**t! We might well have to send him out to the brain clinic to get him f***ing checked out.”

And now Brendan Schaub has responded to the slam:

“I’m sure you’ll learn something from last time when you mentioned my name, but you’re still an idiot, and you don’t think you’re cool, and you’re still calling me a dummy, “dumb” and “f*king idiot” because we want to know about “the chaos” of UFC 279. ”

” You’re not special, you’re not original. You’re a low budget Vince McMahon. Every move you make is a copy cat of that dude. Only thing you have in common is you’re both on ster*ids and dress like a*sholes.

This isn’t the first time the two have exchanged words online. Schaub famously implied that White was sleeping with Ronda Rousey (whom Schaub was dating around the same time). 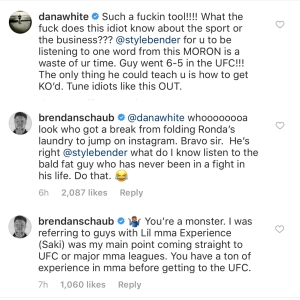 Schaub also claimed he would never call out White again after White was standing by Rogan during the attempt to cancel him back in January.

“But you’ll also love Dana White even more. I will never ever talk sh*t to Dana White ever again. After hearing him going to bat for his guys, he’s just a real one. He’s a real one. He might not like me, but I like him. That’s how it goes.” Schaub said.