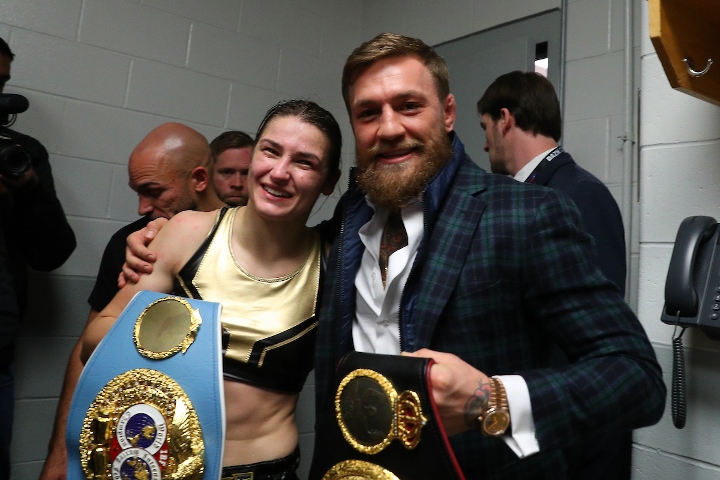 Conor McGregor has eclipsed the sport of MMA in popularity and become the best paid athlete in the World. This of course is a result of a lucrative liquor investment and not of UFC’s generosity and fairness. Still McGregor has just as many passionate haters as he has fans. The haters fraction seems to be growing exponentially with every widely publicized shenanigan. Just over the last year McGregor punched a fellow guest at a private party and even threw a drink at a pop star during a red carpet appearance at MTV Video Music Awards. Still boxing champion Katie Taylor believes the Irish are unfair on McGregor. In a recent guest spot on the MMA Hour she elaborated:

“He’s always been a fantastic support to me, but I think he’s just someone who’s actually transcended the sport. He’s like, for me, the Muhammad Ali of the UFC. He’s just a fantastic athlete. A great businessman as well. But what he’s done in the sport and the UFC has been absolutely incredible, and I don’t think he’s celebrated as much as he should be here in Ireland. I think he is an absolute global superstar and just a phenomenal athlete, and he’s always been a complete gentleman towards me.”

The caveat with Taylor’s statement of course are the sexual assault accusations that surfaced over a year ago. Still nothing criminal had been filed.

Taylor explains:
“I just think he’s had a few controversial moments outside of the cage as well that people obviously didn’t appreciate,” Taylor said.

“But I’m looking at him as just a phenomenal athlete, and someone who I generally think has transcended the sport, someone who’s become bigger than the sport. Nearly every time he does fight, it’s an absolute huge event. He still gets the highest number of pay-per-view figures and he’s still the highest-paid athlete in the UFC. I just look at him as just an outstanding athlete, and I can’t wait to see him come back.”

McGregor is likely the next lightweight contender in spite of having last won a fight in 2020 against Cowboy Cerrone.