Alex Pereira has been on active on the MMA scene for just 7 bouts. The Brazilian kickboxer has been in UFC just over a year.

While Pereira is a vicious striker – he has very clear, glaring deficiencies in his game. Which is perhaps why UFC’s rising welterweight star called him out as soon as he was crowned.

Chimaev is a wrestler first and would be a very hard match for Pereira regardless of the fact that Chimaev is, at least in theory, the smaller man.

At UFC 281, Pereira defeated Adesanya for a third time in his combat sports career, and the first time in MMA.

Immediately after, Chimaev sent a callout to Pereira to arrange a clash in Brazil. At UFC 283, which is slated for January 21, 2023, at the Jeunesse Arena in Rio de Janeiro. 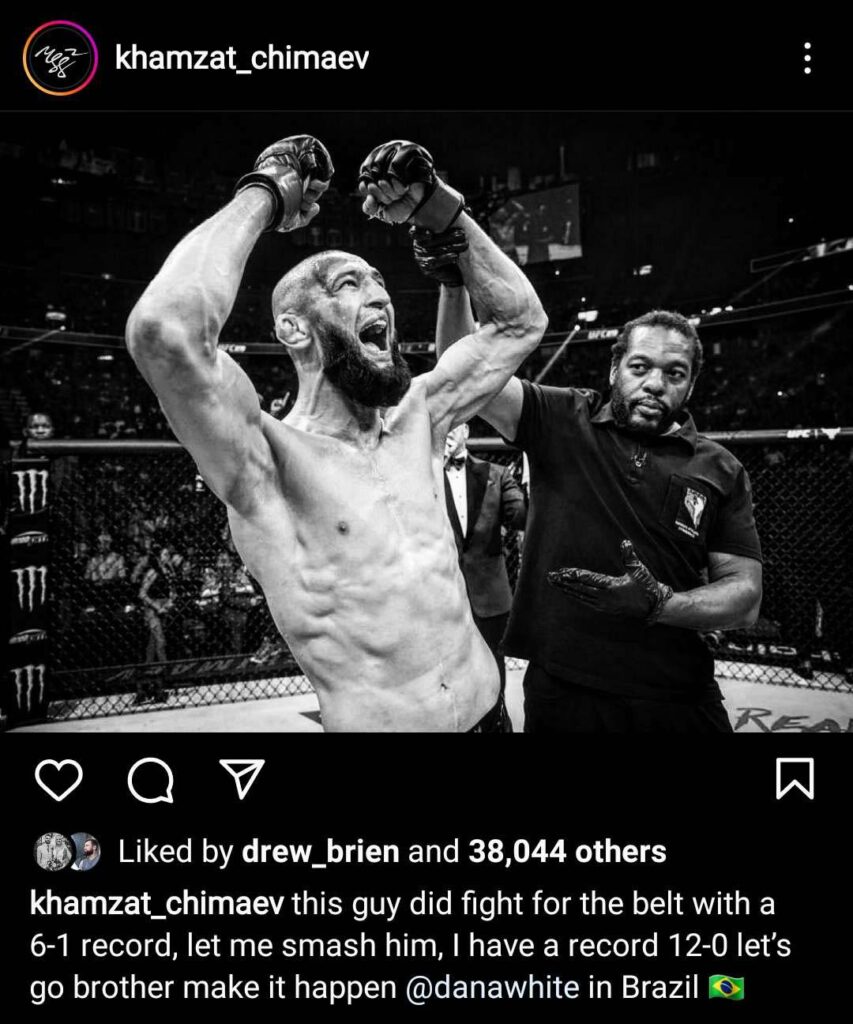 Chimaev hopes to square off against Pereira.

The tweet was a response to his earlier ones, in which he expressed disappointment with the UFC 281 main event and called Pereira’s bout an easy one.

In lead up to UFC 281, UFC veteran Chael Sonnen shared a conspiracy theory that Chimaev was tapped to be the back up for this main event. This, of course, turned out to be nothing but fan fiction but Sonnen did get one thing right.

Chimaev was laying low and hoping for the desired outcome that would clear the path to his victory the fastest.

Dana White was asked about both finish of UFC 281 and what he has planned for Chimaev.

“I don’t know if you guys have headphones over on your side, but the corner in Pereira’s corner that round, it was like straight out of a movie. I want to hear what the corner works going to be. So I put the headphones on and one of his trainers, I don’t know who it was, was like, You’re losing this f**king fight.”

“You need to knock him out in this round. You have to move forward. You have to throw punches and punches. You have to throw combinations. Let your f**king hands go. You’re going to be a world champion in 5 minutes. And then he gets up and goes out there. And it was there was seriously straight out of the movie.”

White reiterated: “Yeah, I didn’t have a problem with the stoppage. You just said it now. I don’t know. I mean, he was hurt. He obviously wasn’t out”

And as for Chimaev, White simply confirmed he’s still targeting clash with Colby Covington however he had no date in mind nor any other pertinent information to share.