BJ Penn had grand political aspirations – and he came rather close to making them come true considering his lack of platform beyond ‘pandemic measures suck’. But he’s not ready to give up yet despite losing the GOP nomination for governor of Hawaii by over 20 points.

BJ Penn was quick to react to the election news attributing the ‘bad’ result to voting issues.

But he’s now taken steps to make his complaints about the electoral process official. As per his own account:

“Yesterday afternoon BJ Penn filed a complaint against the Office of Elections about the 2022 Hawaii Primary Election at The Hawaii Supreme Court.

Beginning weeks before the day of the primary election, our team began receiving a substantial amount of messages from residents who shared testimonials and concerns about their first-hand experiences as voters and observers volunteering, submitting ballots, trying to vote in person, and more. The influx of communication and examples continued beyond the primary election day and several days following. Mahalo to everyone who shared experiences and provided documentation.

A compilation of everything submitted thus far was included in the 100+ page detailed complaint, including hundreds of examples and multiple affidavits from residents on various islands. The submission also included examples related to compliance breaches at ballot counting centers, voting centers, ballot drop boxes, and much more that does not adhere to the State of Hawaii, Hawaii Revised Statutes and the Hawaii Administrative Rules, Title 3, Department of Accounting and General Services, Subtitle 13 Office of Elections, Chapter 177, Rules of the Office of Elections.

The filed complaint was on behalf of BJ Penn, 2022 Gubernatorial Candidate, and the people of Hawaii. The Hawaii Office of Elections has an obligation to the community to oversee the election process with full transparency and accountability. Correspondence requesting detailed reports and clarification about multiple areas of concern has been sent to the attention of Scott Nago, Chief Election Officer, which is still pending his office’s response. A summons was delivered to The Office of Elections yesterday as well.

The filed complaint will be reviewed by the Hawaii Supreme Court, and we will keep you informed throughout the process. Staying united to create a future worth fighting for is very important! Please keep praying for our team and the future of Hawaii.

According to his complaint (via The Honolulu Star Advertiser) “There is an appearance of inaccurate reporting, ballot mishandling, ballot design components, breaches at counting centers and ballot deposit sites, discrimination, voter suppression, and media violations are the main catalysts for this inquiry.”

Prior to the elections Penn had some ideas about how to thwart potential flaws in the electoral system. One of his ideas is to have everyone tag him on social media and to then tally up the votes. 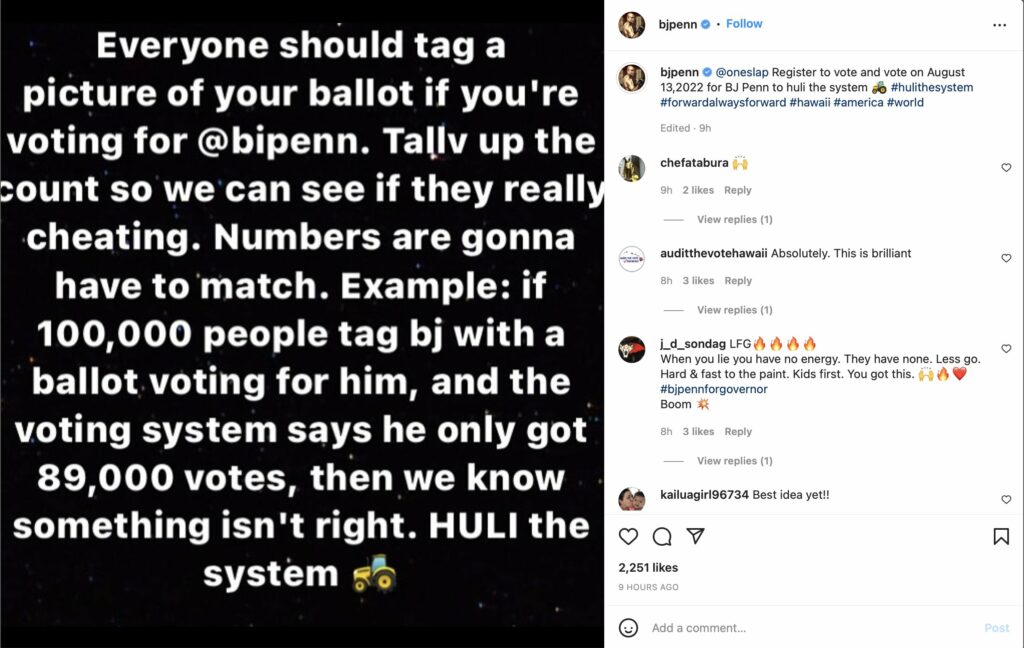 Naturally Penn had no idea how he would deal with multiple people tagging him in the same screenshot – many of which might not even be voters.

So one comes to ask themselves just how did Penn come to create this ‘fool-proof’ system? In an online conversation with fellow mixed martial artist: 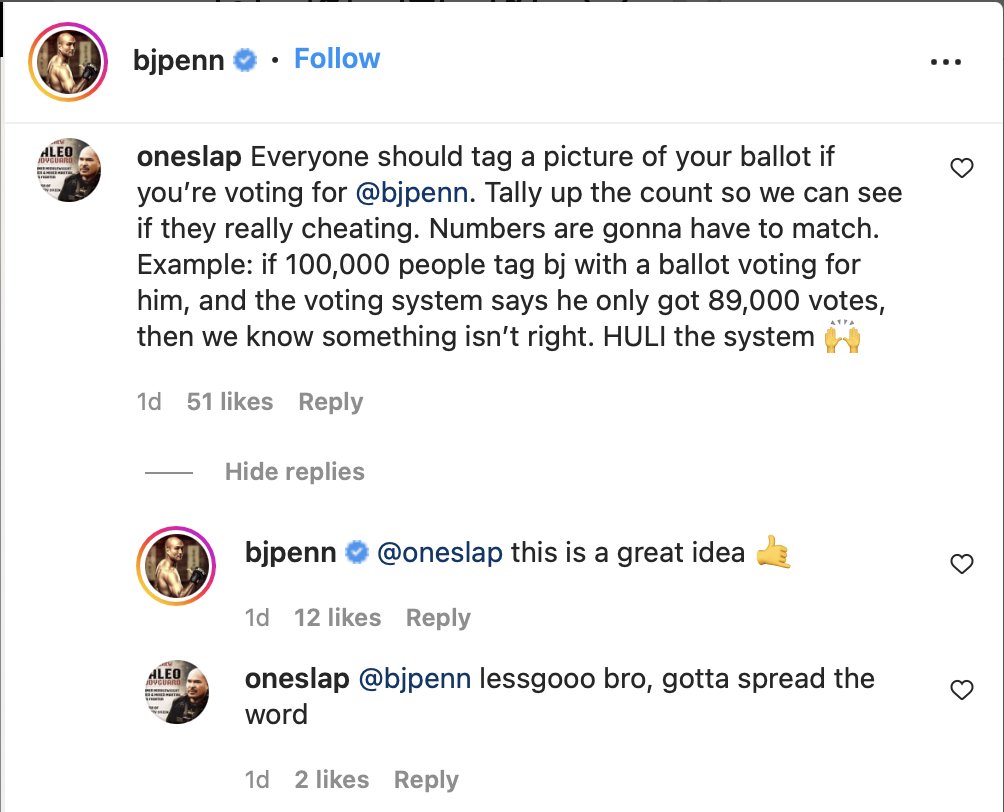 This kind of a call to action produced trolling attempts instantly. 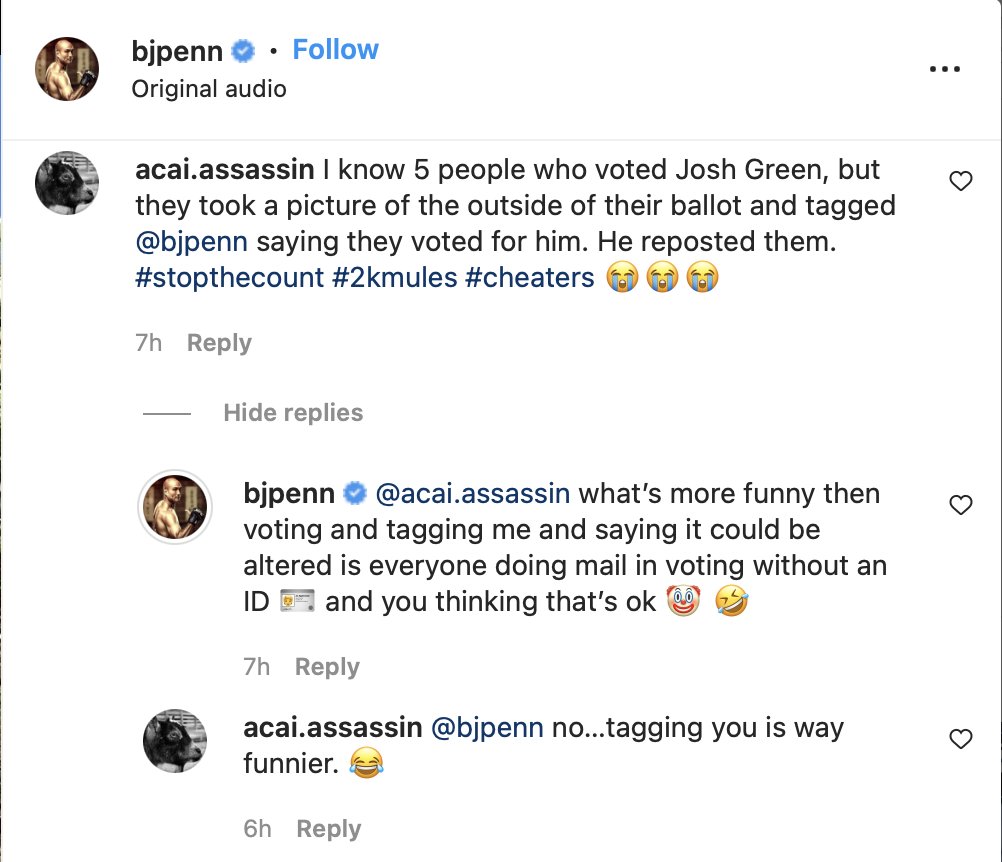 BJ Penn might’ve lost the election but during the course of his campaign he received a number of high profile endorsements including Joe Rogan, Tulsi Gabbard, Jason Momoa and Nate Diaz.

He also outraised all other candidates.