Ben Askren will only return from retirement for the rematch with longtime foe Jorge Masvidal in the UFC.

The legendary wrestler was 19-0 at the time he faced Masvidal in a battle that was meant to prepare him for a crack at the welterweight world championship in July 2019. He entered the match as the favorite because of his outstanding amateur wrestling record and past wins against notable figures in the sport. However, he was eliminated by a humiliating flying knee KO in only six seconds.

A sizable segment of the MMA community formerly believed Askren to be the finest welterweight in the world, especially before his clash with Masvidal. Sadly, the defeat lost him a career-worth of momentum, and after one more unsuccessful attempt against Demian Maia, he decided to give up on sports and undergo hip replacement surgery.

Been off the grid camping….. why is not getting a title shot off 3 losses in a row a controversial opinion????

Askren said in response to a fan’s question on how the rematch with Masvidal would go today on Twitter. He said, “It’s the only thing that I would come out of retirement for.” 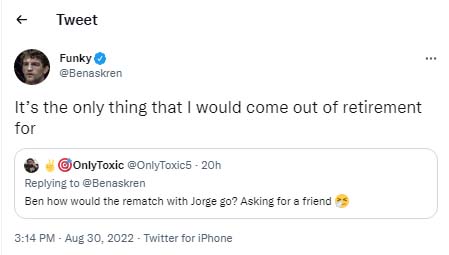 Before receiving an unheard-of trade offer to go from ONE Championship, where he was the welterweight champion, to the UFC, Askren had already all but given up on the sport.

Askren still has one more on his UFC contract.

Considering Askren made a return try in boxing last year but was brutally knocked out by Jake Paul after only one round it’s highly doubtful UFC would ever invite him back – and especially not against Masvidal who might be on a losing streak but still has a lot of star power.

Askren wrote in a tweet, “Been off the grid camping. Why is not getting a title shot off three losses in a row a controversial opinion?”