Ariel Helwani and Paddy Pimblett may have had a very public conflict heading into UFC 282 – but Helwani was actually never critical of Pimblett as a mixed martial artist. The lengthy segment in which Helwani addressed the series of inaccurate statements made about him by UFC president Dana White and Pimblett ended with Helwani adding the following:

“if Paddy never wants to come back on this show again, God bless. I hope he gets paid a $10 million dollars from Barstool and everyone else. I hope he has a freakin gmassive mansion.”

“I hope he has all the success in the world. I hope he wins 40 fights in a row. I hope he’s the biggest star in the history of the UFC. Does it bum me out that this has happen, especially to a guy that I’ve known for a long time, that I’ve had in studio, that I feel like I’ve had his back through the good and the bad?”

“Yeah, he and many fighters can be put in that category, but s** happens. People get in the way. Things are misconstrued. You know, we’re two men. Maybe we should have got on the phone and talked it out back in November of 2021. Mea culpa. And that’s fine. And you want to feel a certain way about me and my job and as a host and all that stuff, that is fine as well.”

“And so I will have more receipts and there’s more that I can say about Dana White. And I can tell you how everything that he said about me he is that times ten. We’ll save that for another day. For another story time. I wish you the best, Paddy.”

But sadly this isn’t what happened and the public perception is now turning on Pimblett.

According to Ariel Helwani Paddy Pimblett’s victory against Jared Gordon is one of the worst decisions in UFC history..

Ariel Helwani called the choice one of the worst choices in the history of the UFC when discussing it on “The Ringer MMA Show.”

“After watching that fight guys, and I can’t… We haven’t really talked beforehand so I don’t know what you’re going to say. I believe that is one of the worst decisions in the history of the UFC. I think that was at worst 29-28 Jared Gordon.” 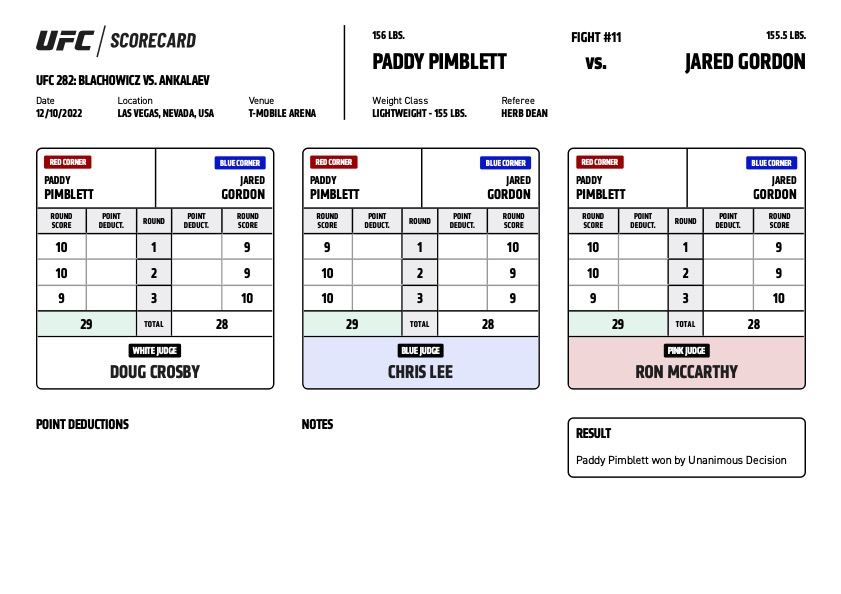 “That being said, I really do think it’s one of the worst decisions. I feel for Jared Gordon. I thought he fought great. That left hand was landing left, right, and center. I think he will regret the third round. I thought he clinched a little too much. I thought he should have just like disengaged and fought.”

“I thought that Jared Gordon’s game plan in the third round was horrible,” White said. “He felt that he had the first two rounds and he went in and pushed him against the fence and I’ve got to go after the ref [Herb Dean], too. A big fight, co-main event, third round, crowd’s going crazy, you’re going to let them stand against the fence the entire fight?

“But these are the things that happen. What are you going to do? Horrible game plan by Gordon. The ref let it happen and he threw the fight away.”