Tate is a controversial influencer and former kickboxer. He often displays his lavish way of life on social media. Tate has been banned from TikTok, Facebook, and other Meta platforms. Twitter reversed the Tate ban under new leadership and he’s back to trolling full time.

Tate gained popularity by spreading his controversial social ideologies, particularly those regarding women. He reignited his feud with Jake Paul after returning to Twitter. Additionally, he made the decision on Tuesday to include Thunberg in his internet network of adversaries.

Greta Thunberg issued a funny scathing response to Andrew Tate’s effort to make fun of her and instantly went viral.

Thunberg is one of the most popular activists in the world. She often challenges international leaders over their views on climate change.

Tate made an effort to enrage the teenager by disclosing his pricey automobile collection.

He tweeted:
“Hello @GretaThunberg
I have 33 cars.
My Bugatti has a wi6 8.0L quad turbo.
My TWO Ferrari 812 competizione have 6.5L v12s.
This is just the start.
Please provide your email address so I can send a complete list of my car collection and their respective enormous emissions.” 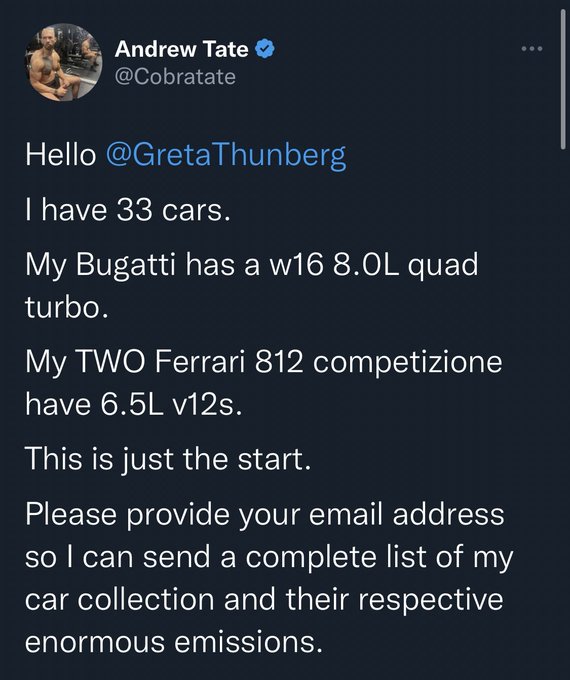 Everyone’s favorite MMA influencer Jake Shields shared his own response to the drama in the mean time – and of course got an answer from Tate who was happy to have someone in his corner for once. 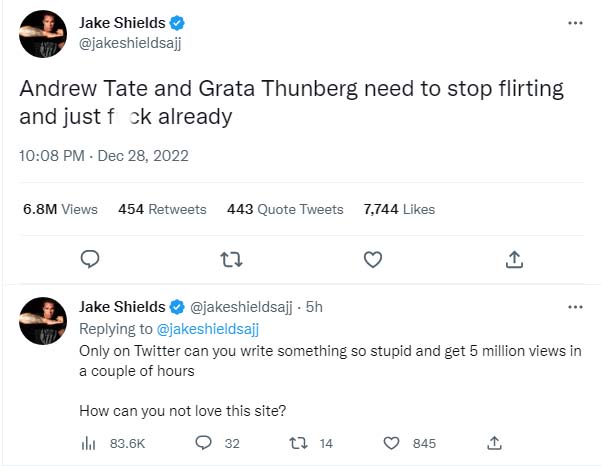 Thunberg responded by tweeting: “”Yes, please do enlighten me. Email me at smalld**[email protected]” 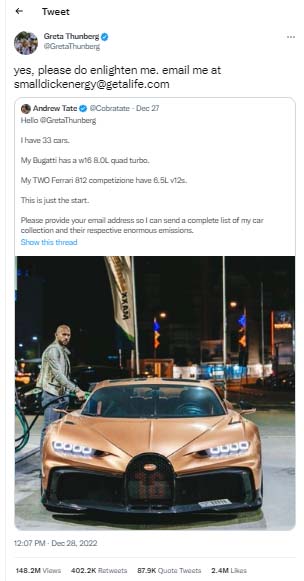 One person commented: “I didn’t see this one coming. Tate being ratioed by Thunberg after 1 hour.”

Another person tweeted: “This is how to burn without emitting carbon.”

A third added: “Just when I thought she couldn’t get any better.”

While another person added: “If more historical figures had Twitter back in their time there’d be a lot more quotes like this in books.”

Tate is said to be interested in competing against Jake Paul in a boxing match. The two had a verbal altercation while they were in attendance at the Floyd Mayweather vs. Deji match in November. It wouldn’t be the strangest thing to happen given the sizeable social media followings both Tate and Paul have.