Silva, who has a 2-0 professional boxing record, received his boxing license on Friday afternoon in Arizona.

The Arizona commissioner validated the application.

“Congratulations, Mr. Silva. We eagerly anticipate what is ahead.”

“What Anderson just told me is that it would be professional boxing rules,” he said. “Eight rounds of three minutes [each] with 10-ounce gloves, and, of course, with knockouts being allowed. The weight, if I’m not wrong, will be 85kg.”

“Jake is a talented kid, no doubt, but he never faced a real striker,” Dorea said flatly. “Anderson is a different athlete. He is [an] orthodox fighter that fights as a southpaw, so he has power in both hands. He moves very well and has amazing [footwork] and distance control.”

The 47-year-old Silva had a legendary tenure as the UFC middleweight champion and is regarded as one of the best in history by many including Nurmagomedov, White, Georges St Pierre and more.

Since he began competing professionally in 2020, Paul has drawn criticism for the caliber of his opponents. He boxed Nate Robinson, a former NBA player, and fellow YouTuber AnEsonGib before focusing on MMA and defeating Tyron Woodley and Ben Askren.

The 25-year-old twice set up matches with Tommy Fury, Tyson Fury’s brother. However, the events were called off. Fury withdrew from the bout earlier this year after being unable to fly to America for a press conference due to a travel ban stemming from his brother’s association with Kinehan cartel. Prior to that he had a fractured rib he sustained in training in December.

Reminder that this is what 47 yrs Old Anderson Silva did in his last boxing match 😇 pic.twitter.com/atVHA1ZO6I

Many believe this will be a first test for Paul despite the fact he’s almost 20 years younger than Silva. Silva is 47 years old.

While Silva makes sense to MMA fans, Paul’s own trainer dismissed him as an opponent 8 weeks ago. 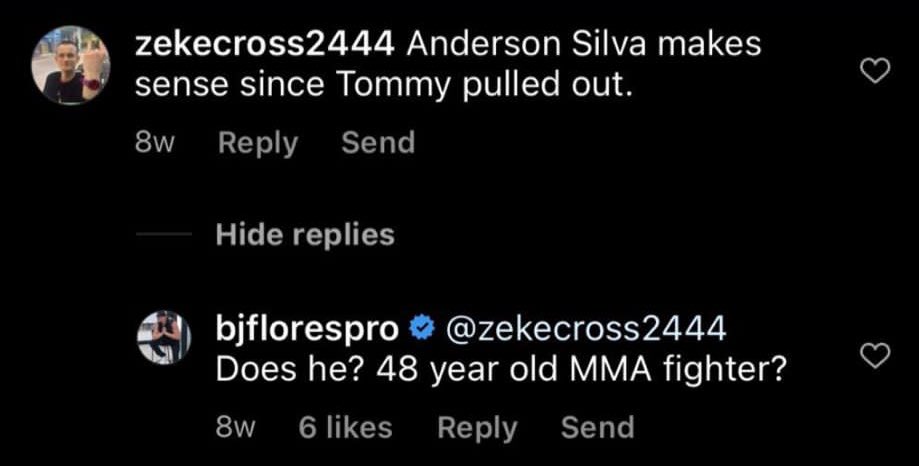 Even Dana White was complementary of the match up:

“I don’t give a s*** about [Jake Paul], but if he’s really fighting Anderson Silva, if that’s true, it’s about time,” White said. “He’s got a real fight on his hands there, regardless of how old Anderson is. Yeah, that’s a real fight.”