Last night SMMAF uploaded a post on their Facebook where they explained that the top gym Allstars will not be allowed to participate in the Swedish MMA league. 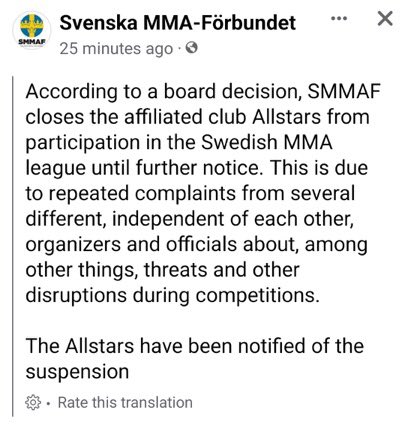 “According to a board decision, SMMAF closes the affiliated club Allstars from participation in the Swedish MMA league until further notice. This is due to repeated complaints from several different, independent of each other, organizers and officials about, among other things, threats and other disruptions during competitions.
The Allstars have been notified of the suspension”

The suspension is suspected to be related to the brawl that broke out at Wolf Fight Promotion 3 event. During the incident an official was kicked in the back of the head by a person with alleged connections to Allstars.

According to the insiders from the Swedish MMA scene the gym isn’t policing bad behavior.

One commenter writes:
“It is not the first time this has happened and Allstars do not seem willing, or able, to solve the problem. Of course, the martial arts club has a responsibility over what their athletes do and can choose to suspend them or kick them out. I know several athletes who changed clubs precisely because of the mentality of Allstars.”

It’s worth mentioning that both Chimaev and Gusafsson have criminal records in Sweden.

Gustafsson once served 15 months in a Swedish prison for “grievous bodily harm.” It appears as though Gustafsson has a number of convictions for aggravated assault including a year and three months in prison.

A month after his professional debut, the Swedish MMA star was sentenced for the assault.

The penalty was a suspended sentence with community service.

In October 2017, Khamzat’s friend was stopped by an employee inside a department store in Kalmar. The staff suspected that the friend was in the process of stealing a pair of headphones and, after protests, put him on the ground.

Chimaev hurried there. According to the verdict, the martial artist delivered a punch to the shop employee’s face, which, according to the prosecution, caused him to fall over and hit his leg on a shelf. He is said to have suffered wounds in his mouth, a sore jaw and an injury to his leg.

Khamzat Chimaev himself believed that it was a shove or a shove, and that he was acting in self-defence.