ADCC 2022 takes place this weekend at the Thomas & Mack Center in Las Vegas.

There are a ton of young champions and legends competing for the prestigious prizes. ADCC is widely regarded as the Olympics of grappling.

The brackets were just revealed:

ADCC 2019 finalists Bia Basilio and Bia Mesquita will be trying to get the prestigious prize by derailing the hopes of Alliance prospect Maysa Bastos and 10p hopeful Elvira Karpinen (who previously eliminated UFC’s Mackenzie Dern in 2019). 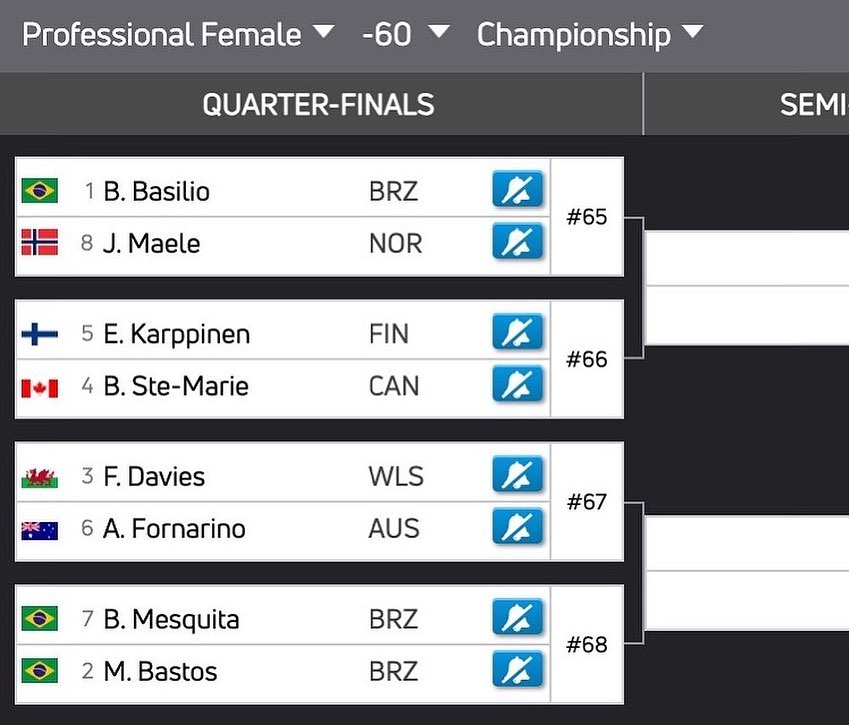 In the women’s over 60 division, Gabi Garcia returns again to capture the record breaking 5th title. Garcia has been on a downwards trajectory for a while now but despite that her size alone should give her a huge advantage over the division. Kendal Reusing is the only one that might give her trouble at first glance. Many of Brazil’s top women over 60kg are absent from the bracket. 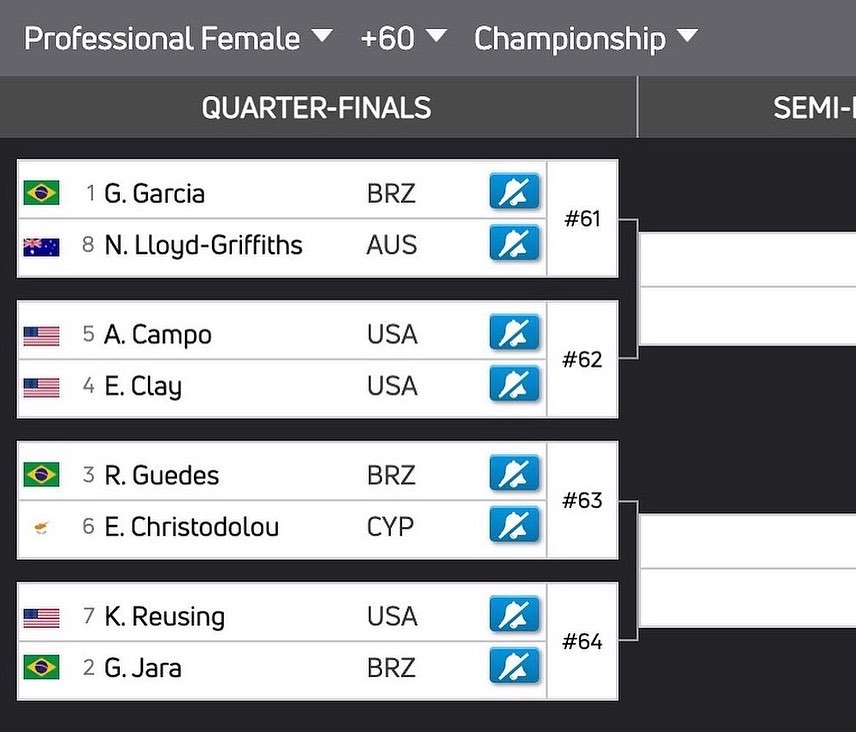 In the 66 kilo gram division we have ONE FC’s title contender Garry Tonon. Tonon previously competed at 77kg and won bronze in the 2019 edition of the event. There’s a number of prominent competitors in the division. Kennedy Maciel for one, he is the son of former champion Rubens Charles who lorded over the division in the past.

Bellator’s own AJ Agazarm returns to competition in jiu jitsu on this occasion (though he has recently appeared and lost at BJJ Stars). Agazarm and Geo Martinez are significantly older than much of the bracket giving them a clear disadvantage in a division where so much depends on speed and accuracy.

Another notable competitor is Ethan Crelinsten. Crelinsten might’ve shown more promise if he wasn’t seeded to face Garry Tonon in round 2. ADCC famously matches teammates in the opening rounds of the competition. 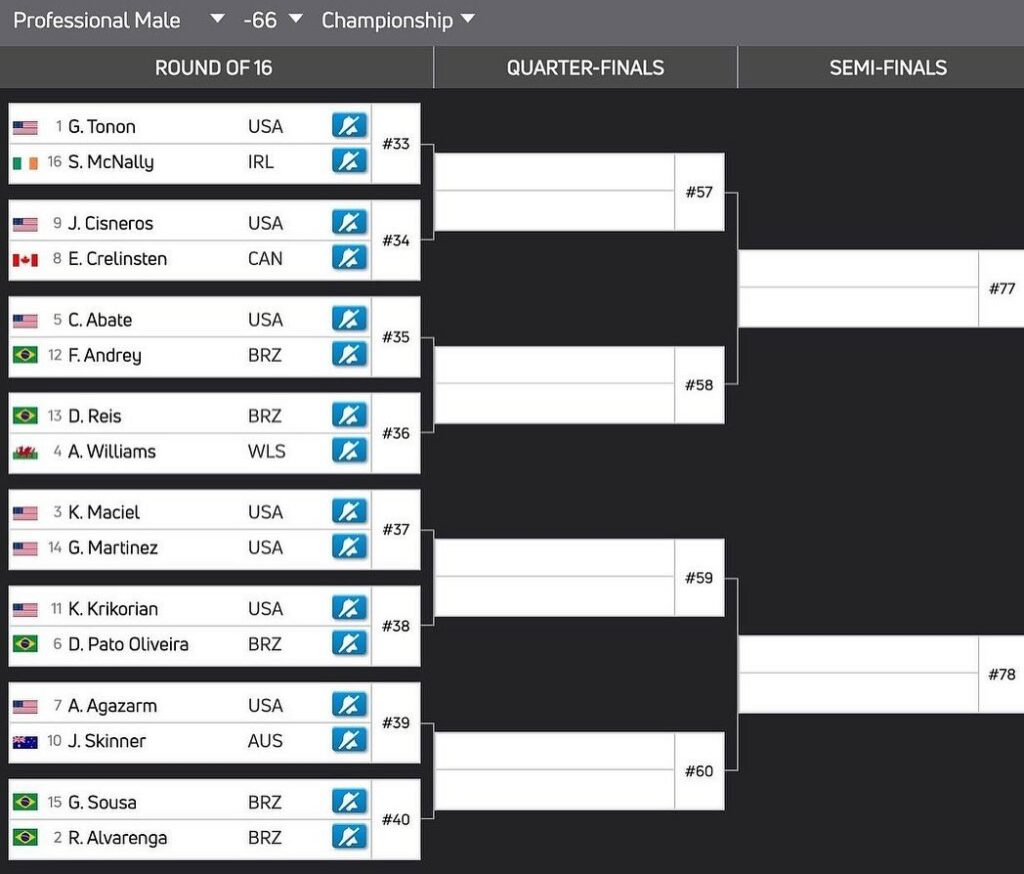 The 77 kilogram division features a clear front runner in JT Torres. Torres has won this division a number of times and is known as one of rock solid men in this division. He will be facing a new wave of young competitors including Kade Ruotolo of Atos, Mica Galvao and Gordon Ryan’s younger brother Nicky.

Torres is more than likely to repeat his success but it will be interesting to see if any of these young studs can pull an upset. Mica Galvao might be the most likely to pull it off. 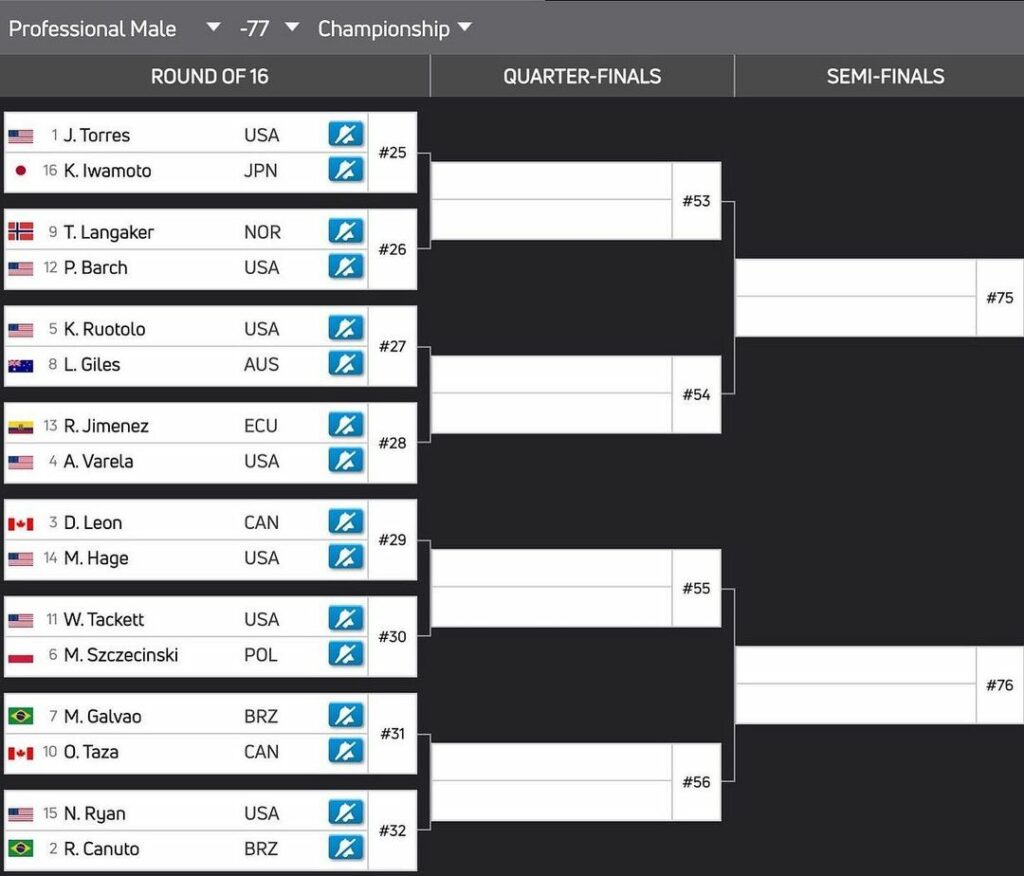 The 88 kilogram division will be featuring 2019 winner Matheus Diniz. Diniz will have an interesting time going through a Danaher adoptee in Giancarlo Bodoni not to mention the possibility to face a seasoned veteran like Xande Ribeiro.

The division will also be featuring Lucas Hulk Barbosa. Barbosa will be returning to bjj after an MMA outing at PFL for which he cut a significant amount of weight. Barbosa is known for his explosiveness so it’s definitely interesting to see if he can resurrect and dethrone Diniz. 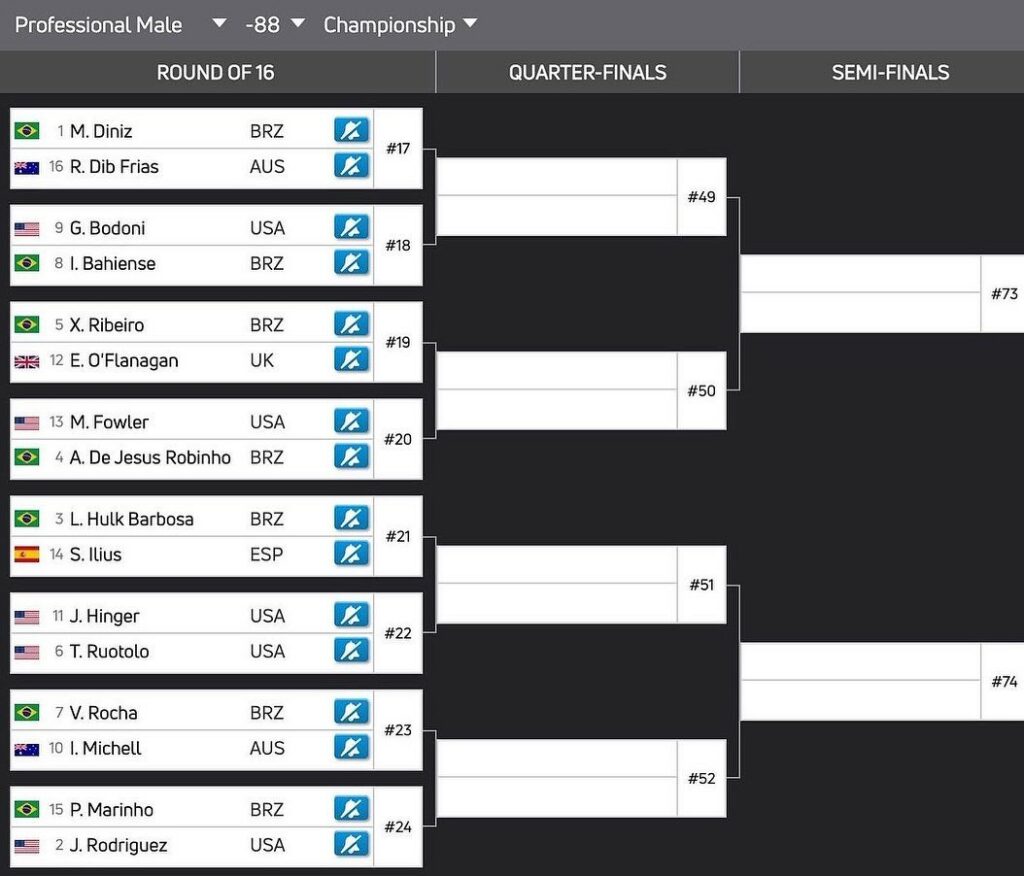 Upto 99 kilogram division will be featuring a number of high profile competitors including former Bellator Champion Rafael Lovato Jr. Lovato will be competing this weekend despite the Brain tumor diagnosis that derailed his MMA career. Lovato suffers from something called a granuloma which is an abnormal venous formation in his brain.

Kaynan Duarte previously won the division so he’s a clear choice  for a favorite. Besides Duarte the division will be featuring perpetual silver medalist Craig Jones known to pull an upset in addition to former champion Yuri Simoes. Simoes is back to grappling after a stint at ONE FC that didn’t go his way. Simoes was also rumored to be losing grappling matches to Islam Makhachev over at AKA so it’s unclear what if anything can be expected of him this weekend.

The division will also feature a nogi debut of a proven world champion Nicolas Meregali. Meregali detracted from Brazil and joined New Wave BJJ in Texas in order to make the transition. He’s a wildcard in this division. 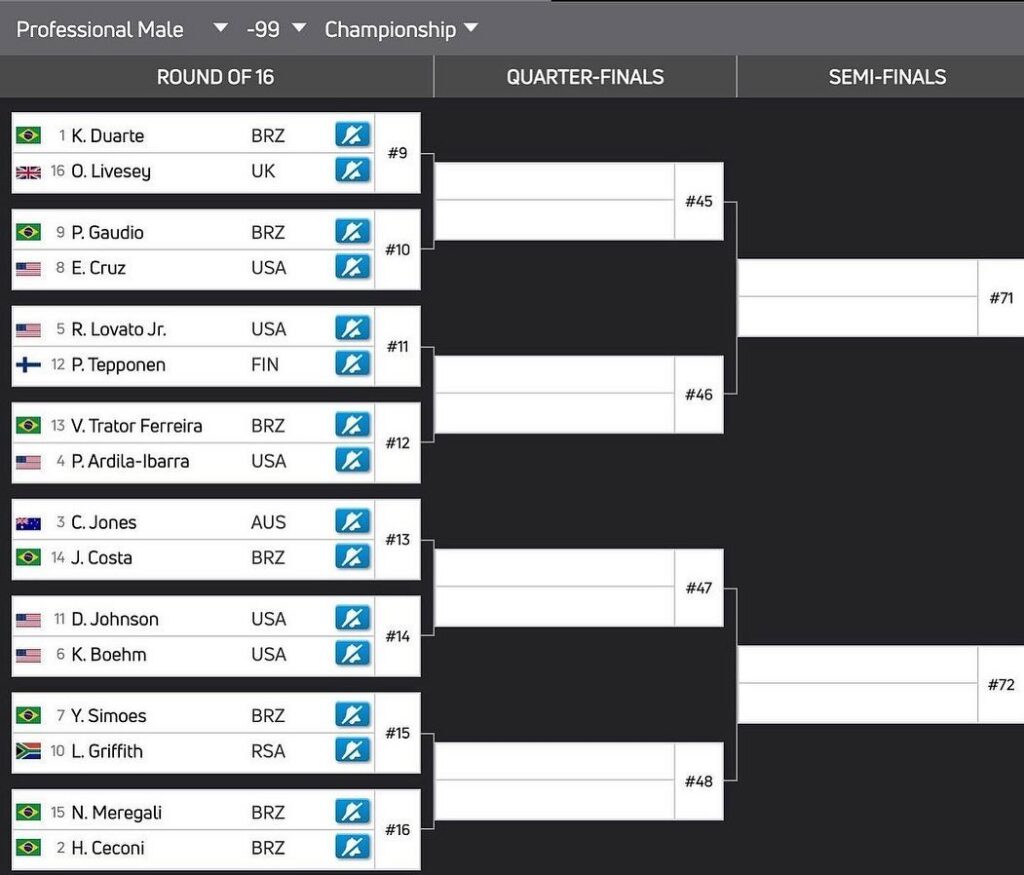 Over 99 kilogram division is rarely seen as the go-to for great jiu jitsu but that might all change with the addition of absolute champion Gordon Ryan. Another -99 competitor switching to the division is his long time foe Felipe Pena (who also previously won absolute). They are joined by veterans Cyborg Abreu and Vinny Magalhaes.

The wild card in the division is Nicky Rodriguez. Rodriguez debuted as a purple belt at ADCC 2019 and had managed to snag a bronze medal after a short stint doing jiu-jitsu. If he’s progressed half as much as he did in his first couple of years he’ll be the one to watch. 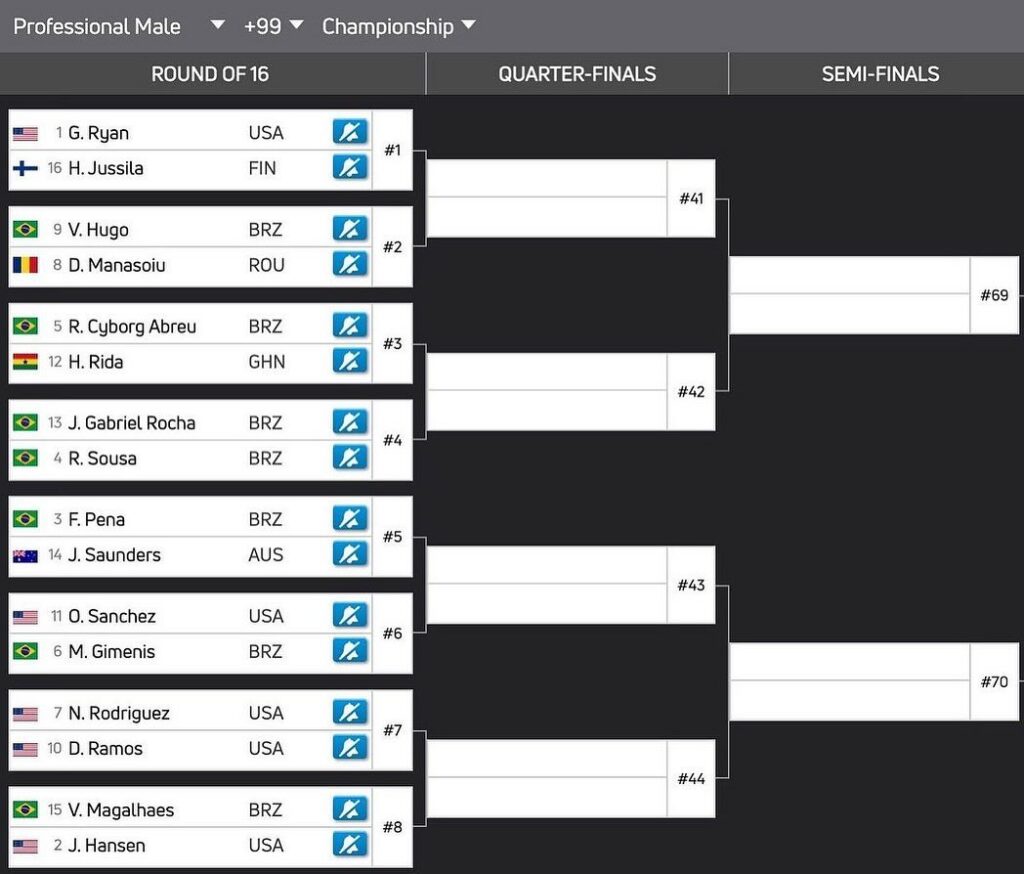 In addition to the divisions ADCC will also be featuring a clash between Gordon Ryan and longtime nemesis Andre Galvao. Galvao is somewhat of an ADCC superchampion having won 4 of these standalone matches including against former absolute champion Felipe Pena.

The event starts at 10am PST .